Denver-based South Dakota Proppants (SDP) is proceeding with plans to develop a mine on federal lands in southwestern South Dakota to supply sand used in hydraulic fracturing (fracking) for shale oil/natural gas production in the Williston and Denver Julesburg (DJ) Basins in North Dakota and Colorado. 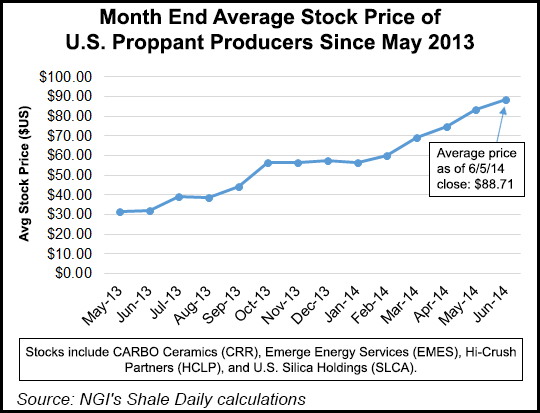 Galvin said his company plans to submit a mining plan in South Dakota to create a $66 million, 1 million ton/year fracking sand mine on 950 acres of public access U.S. Forest Service (USFS) lands that he estimates have 70 million proven recoverable tons of “high quality fracking sand.” He said it will take 24 months before product will be available for commercial shipments.

The company has begun the permitting phase, which will be headed by the USFS, with help from the state, including DENR, whose earlier study did not include the lands SDP is pursuing. Subsequently, the state geologist and DENR confirmed Galvin’s analysis that sand at his proposed site does meet API specifications for proppant, adding that the SDP samples appeared to be of “better quality” than the ones the state study had examined.

Galvin said this was confirmed in an April 21 e-mail from the state. Separately, when queried Thursday by Shale Daily, North Dakota’s chief oil/gas regulator, Lynn Helms, director of the Department of Mineral Resources, said he was unaware of the SDP proposed mine but that he thinks a viable sand project could be started in southwestern South Dakota.

“We are very positive about the fact that we are on the road to building the only frack sand mine in South Dakota that is capable of directly reaching well pads by truck,” Galvin said.

The U.S. market currently uses 53 million tons of proppant annually with the market growing at about 3% per year, Galvin said. Since activity in the Williston represents one-third of the nation’s largest shale developments, he estimates that about 20% of the 53 million tons are being used in the Bakken/Three Forks plays.

“Some companies are increasing the size of the wellbore to lower the pressure at the end of the pipe and provide more flow as the horizontal runs are getting to be very long,” Galvin said. “This increase will require more sand as well, so the need for increased volumes-per-well is also on the horizon.”

The bulk of the proppant used in the Bakken comes from Ottawa, Canada and Wisconsin, requiring rail transportation that costs about $35-40/ton more than shorter, truck shipments, Galvin said. Truck transportation of sand to the Bakken from South Dakota would cut the cost of the product an average of $8-20/ton, “making [our] sand the low-cost provider for the surrounding oil basins,” he said.

The South Dakota mine site would be located about 300 miles to either the Bakken or Niobrara oil/gas drilling sites.

The trend of using more sand and higher-quality ceramic and resin-coated sand in the well completion process has been captured by the stock market in recent months. Since the end of May 2013, the average stock price of U.S. proppant producers Carbo Ceramics, Emerge Energy Services, Hi-Crush Partners and U.S. Silica Holdings has increased from $31.34 to $88.71, good for a price-only gain of 183%. All four of those stocks pay a dividend, so the combined stock performance since May 2013 is even higher on a total return basis.