Cheryl LaFleur, who has served at FERC since 2010 and headed the Commission twice, announced Thursday that she will step down later this year following the end of her third term. 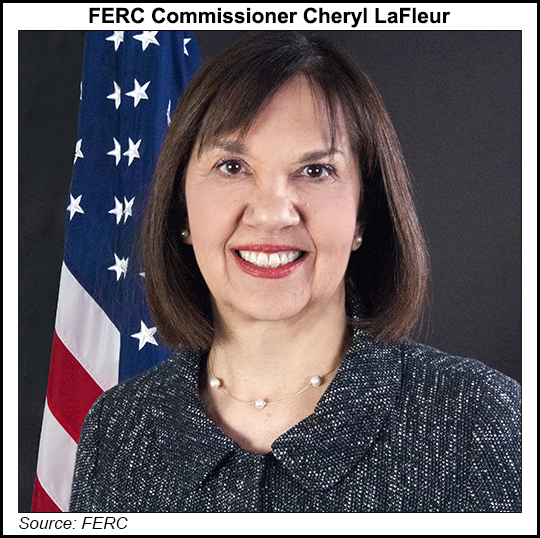 “While this is not the outcome I had hoped for, I feel very lucky to have served on FERC for more than eight years (and counting),” LaFleur said in a series of Tweets. “I plan to stay at FERC at least through the end of my term on June 30, and probably longer, depending on my future plans and the possible appointment of a successor.

“It has been a high honor to serve at the Commission, and I love working here. I have many people to thank for the opportunities I’ve had, and will certainly have more to say as I get closer to actually leaving.”

LaFleur, a former executive vice president and acting CEO of National Grid USA, was nominated to FERC by President Obama in March 2010 and was confirmed by the Senate two months later.

In November 2013, Obama named LaFleur to be acting chair of the agency, taking over after then-Chairman Jon Wellinghoff left FERC. In July 2014, LaFleur was confirmed to a second term. In an unusual move, she was named chairman and another Obama nominee, Norman Bay, was confirmed with the understanding that he would become chairman and LaFleur Commissioner in April 2015.

LaFleur answered the call once again in January 2017, when Bay resigned and President Trump named her acting chairman. Seven months later, Neil Chatterjee, another Trump nominee, was sworn in as Chairman and LaFleur was again a Commissioner.

LaFleur “has been an outstanding FERC Commissioner,” said Tony Clark, who was a Commissioner with LaFleur from 2012 until 2016. “Even when we disagreed, which wasn’t too often, it was never disagreeable.”

FERC currently has four members — Chatterjee and Bernard McNamee, who are Republicans, and LaFleur and Richard Glick, who are Democrats. Commissioner and former Chairman Kevin J. McIntyre, who had been battling cancer since 2017, died Jan. 2. McNamee’s term expires in 2020; Chatterjee’s in 2021; and Glick’s in 2022.

The White House has given no indication of who President Trump might nominate to replace McIntyre or Lafleur. By law, no more than three seats at FERC may be held by one political party.