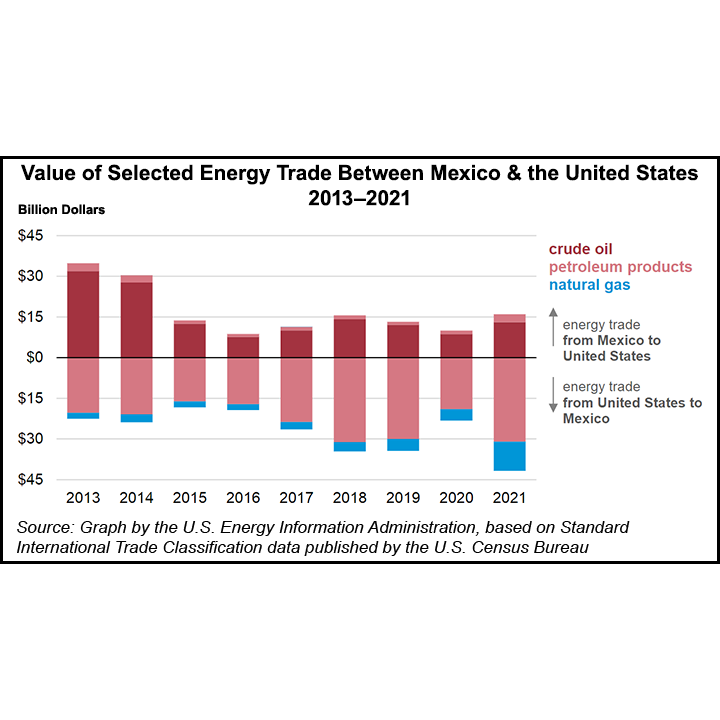 The asymmetry between the energy markets of the United States and Mexico is a consequence of differences in natural resource endowments, economic models and ideologies. Mexico’s government in the last few years has made it clear they’d like the energy sector to take a different course from that of the North American region. This has had multiple manifestations.

In terms of infrastructure, the prevailing agenda north of the Rio Grande has to do with the creation of new natural gas projects in a context of energy transition along with the need to meet the disruptive increase in global demand triggered by the crisis in Ukraine. Regulators and investors are adjusting their requirements and expectations in order to make liquefied natural gas (LNG) export growth feasible.

South of the border, the drought of new projects is partly due to formal and informal regulatory obstacles to deny authorizations. The messaging from President López Obrador is also discouraging investment. The Mexican government seeks to create a market controlled by state companies Petróleos Mexicanos (Pemex) and Comisión Federal de Electricidad (CFE).

On the subject of sustainability, each country has its sights set on opposing paradigms. The discussion around defining thresholds for greenhouse gas emissions in energy infrastructure projects to be authorized by FERC is unthinkable to Mexico. Regulator Comisión Reguladora de Energía (CRE) has made it clear that its mission is to rescue state companies. The idea of ​​certifying the production and supply of natural gas in Mexico isn’t under discussion. On the contrary, the impact on the atmosphere of gas flaring does not come under any regulatory scrutiny.

While the Federal Energy Regulatory Commission took action in April to improve its policy around the formation of price indices to encourage greater participation by those who execute transactions, in Mexico the main sources of economic and operational information on the gas market are government entities. What’s more, the way they publish data is increasingly aggregated, disjointed and inconvenient.

The surveillance that the CRE must carry out on the quality of the electronic bulletins of carriers and other permit holders is deficient. Companies publish data with delays, for limited periods and updates come with irregular frequencies. Many companies are not aware of their regulatory obligation and do not have any public information platform. Mexico is a highly opaque market in transition in which it is not easy to know the characteristics of the transactions, in terms of volume and price, once the gas is delivered to the entry points at the border.

The divergence between countries is accompanied by a stark contrast between the operational realities and the goals of energy policies on both sides of the border. Despite this, imports of natural gas have not stopped growing and this fuel is the largest primary source for electricity generation in Mexico.

Most of the time this growth goes unnoticed until a supply, price or political situation exposes the high dependence that the country has on gas from Texas. This happened with Winter Storm Uri in 2021. Now, the anti-immigrant rhetoric espoused by the governor of Texas, Greg Abbott, is raising similar alarm bells. Amid a high price environment, Mexicans are bemoaning the meager efforts to increase domestic natural gas production.

But the energy policy of the current government does not see in private capital the solution to increase extractive activities. The government believes Pemex can do everything on its own. Regardless of which company is in charge of producing gas, the Mexican geological reality is one in which 10 Tcf of proven reserves are insufficient to serve a market that requires 7-8 Bcf/d. Today, some 6 Bcf/d of that comes from the United States, most of it from Texas.

The bulk of the Mexican population is unaware of the economy’s dependence on natural gas from Texas. Cultural beliefs and current political propaganda lead the common citizen to think that “energy sovereignty” is an achievable goal and that it is laudable that López Obrador dedicates his efforts to it. The president says low gas production is the fault of the corruption of the past. Given the lack of economic results in his management, his bet is to convince the public that the previous elite was a defender of foreign interests.

On the Mexican side, there is a lack of knowledge of the substance of the liberalization processes that have occurred in the last 30 years in the North American region. When the government condemns self-supply and cogeneration projects, few understand that these schemes were an alternative to achieve competitiveness within the framework of the trade treaties that bound the region together. In a context in which CFE had no way to reduce its generation costs due to lack of public resources, the opening for companies to invest their own resources in their electricity procurement allowed public money to remain concentrated in public service.

U.S. natural gas exports to Mexico averaged 5.9 Bcf/d in 2021, of which 99% was sent by pipeline. This is up from 5.45 Bcf/d in 2020. There is no possible scenario in which Mexico can become independent of Texan natural gas supply. A responsible posture should focus on finding ways to diversify supply sources and improve the reliability of existing resources. Reliability entails trust and trust is more conducive to common interests.

In this regard, and given the relevance of energy in regional economic functioning, Mexico’s foreign policy should do its best to maintain a good relationship with the Biden and Abbott governments. At the upcoming Summit of the Americas to be held in Los Angeles, Mexico should take advantage of this opportunity to propose a long-term hemispheric energy security strategy.

Unfortunately, Lopez Obrador has threatened to pull out of the summit if President Biden doesn’t invite the presidents of Cuba, Nicaragua and Venezuela. This would be a wasted opportunity. Mexico and the United States need one another. Energy trade is a key part of the economies of both nations. The value of cross-border energy trade between the United States and Mexico reached a nine-year high of $42 billion in 2021, according to the U.S. Energy Information Administration (EIA). If Lopez Obrador doesn’t attend, Foreign Minister Marcelo Ebrard, one of his potential successors in 2024, will go instead. It would be another confusing move on the part of this government.

Natural gas futures were rallying early Tuesday as a drop in the latest production estimates added to the concerns of a market already skittish over supply adequacy heading into the summer cooling season.  The June Nymex contract was up 35.1 cents to $8.307/MMBtu at around 8:45 a.m. ET. July was up 34.3 cents to $8.396.…