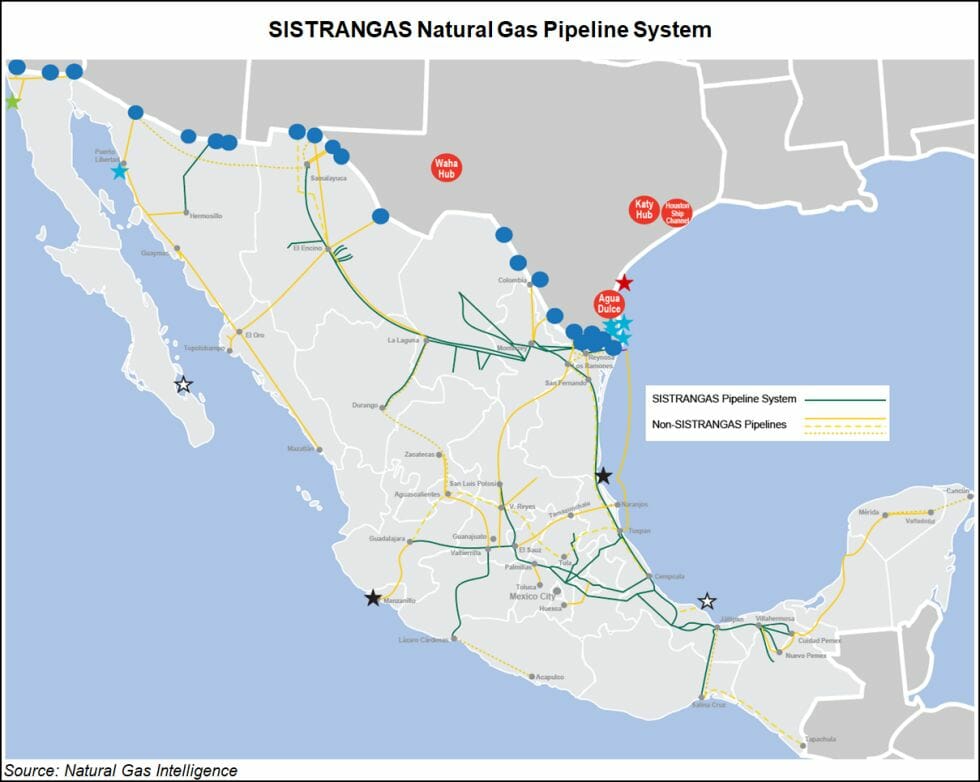 A few weeks after Mexican Energy Minister Sener announced its strategy for optimizing capacity on the Sistrangas natural gas pipeline network, the companies that participate in the gas sector have begun to take legal action against it. Consequently, some judges specialized in economic competition have sided with the complaining companies, which include Fermaca and some subsidiaries of Engie SA.

The Constitution and the Hydrocarbons Law back the judicial decision. The content of articles 25, 27 and 28 of the Constitution is very clear in pointing out that monopolies are prohibited in Mexico, except in some strategic areas reserved for the public sector.

The Constitution fully identifies what they are and, with regard to the scope of the Comision Federal de Electricidad (CFE), only in the transmission and distribution of electricity does it enjoy exclusivity. The rest of the activities in the value chains of the energy sector can be carried out by the private sector, and they must be performed under competitive conditions.

The legal framework resulting from the 2014 energy reform is not a set of rules for private participation. It is a national strategy to achieve the efficient and competitive development of gas and electricity markets. The separation of activities and open access allow for competition among multiple agents.

In the rest of the segments where certain qualities of natural monopoly persist, such as the transport network managed by Cenagas, an economic regulation ensures that operators do not discriminate or exercise market power that extracts rents from users.

Producers or intermediaries must be able to reach their customers by comparable means, and their economic success must lie in their productivity and commercial ability. Clients contract natural gas services in a voluntary act. With existing infrastructure, Mexico can import 13.7 Bcf/d from the United States, the most thriving natural gas producing region on the planet. They can do so through 24 entry points.

Users in Mexico have not shown a marked preference for any of the state companies and since 2017 the country has become a market in transition with a significant number of marketers operating in Texas. If many system users are still unable to burn gas from the United States, it is not due to a lack of interest in the Mexican market on the part of marketers, but rather because it is difficult to achieve a direct commercial relationship with end customers.

Pipeline transportation, an activity regulated by the Comision Reguladora de Energia (CRE), is essential for access to markets. The Hydrocarbons Law explicitly promotes competition and free competition as a means to achieve efficiency in the marketing segment.

The pipeline transportation capacity of the Sistrangas satisfies the characteristics of an essential input. Thus exercising restrictive control of access to the system can be classified as a barrier to entry and a monopolistic practice.

Sener’s plan that marketers import gas through CFE or Pemex unilaterally and selectively benefits the state companies. Even among these state companies, it imposes discriminatory treatment: the CFE subsidiaries, that is, CFEenergía and CFE Internacional, have preference over MGI, the Pemex subsidiary.

Sener is hurting competition and free market access. On the one hand, Sener acts as the entity responsible for energy policy, a function that fits properly within its legal powers. On the other hand, in its role as head of the boards of both Pemex and CFE, it exercises corporate control within an economic interest group. The law is clear here: Sener must promote the development of industries, not of some specific companies. Pemex and CFE must generate value in a competitive environment. Cenagas is a guarantor of open access and is responsible for the continuity of natural gas service. Cenagas must offer transportation capacity to CFE and Pemex in the same way that it treats BP plc, Shell plc, ArcelorMittal SA, Braskem Idesa or smaller companies.

But with his arrival in government, members of President López Obrador’s team have stated in private and in public that state companies are part of the same team and therefore must act in coordination. All state entities must help each other. The CFE must burn Pemex’s excess fuel, Cenagas has to help Pemex and CFE keep their clients on the Sistrangas, and the CRE must not regulate the industry but put measures in place to help out state firms, even though this is detrimental to the wellbeing of energy system users. Sener’s latest mandate serves as a catalyst for the hoarding impulses of the state firms.

The joint statement from the governments of Mexico and the United States following López Obrador’s visit to the White House this week emphasizes a commitment to improve the competitiveness of the region and efforts to combat inflation. The Sener directive on gas imports does not help any of these purposes. In any market, balance is achieved when prices reflect the conditions of scarcity or abundance in a competitive environment for all players. Non-state companies should be seen as a healthy part of a competitive environment whose existence helps bring down prices, and not as adversaries to be eliminated.