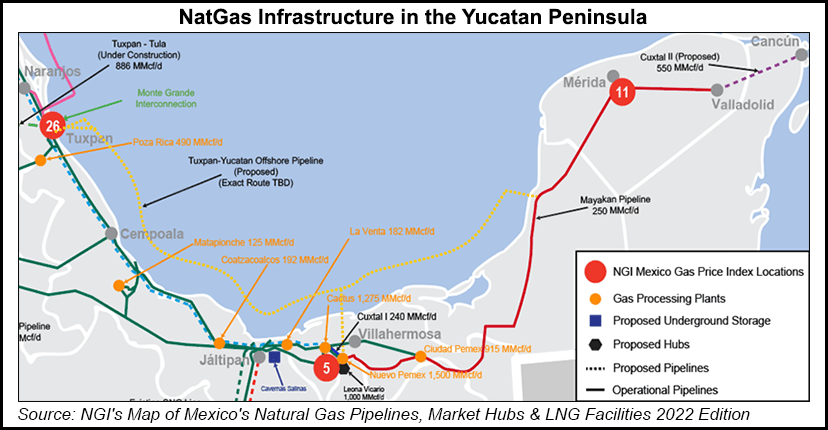 A major new pipeline project appears to be in the works to get natural gas to Mexico’s southeast. The Yucatán Peninsula is in permanent risk of natural gas supply shortages despite the fact that the Mayakan pipeline system has improved its connectivity with Petróleos Mexicanos (Pemex) processing centers through the Cuxtal I project.

Since 2019, production from the Cactus processing center has been used to complement Mayakan volumes from the Nuevo Pemex processing center. Mayakan’s 240 MMcf/d is used in the electricity sector mainly. The 652 MW Mérida and 820 MW Valladolid plants take up about 132 MMcf/d of this, even though 270 MMcf/d is needed in a peak scenario. In an area where it is not uncommon to see nodal prices above $180/MWh, the demand for natural gas is clearly restricted.

Meanwhile, more gas-fired power is coming online. The Comisión Federal de Electricidad (CFE) is planning to build the Mérida IV (533 MW) and Riviera Maya (1,125 MW) natural gas-fired plants. There is also the 252 MW Campeche combined cycle plant, also connected to the Mayakan. The plant went into force majeure due to the explosion in April 2015 of the Abkatún Alfa platform in the Gulf of Mexico and Pemex’s subsequent suspension of supply.

Currently, the supply of natural gas to the Yucatán Peninsula occurs through a swap between CFE and Pemex. This consists of Pemex supplying gas to the Mayakan, with the gas produced in Cactus and Nuevo Pemex in exchange for CFE importing equivalent amounts and transporting them to the center and southeast of the country to points of consumption that are commercially served by Pemex in the national Sistrangas pipeline system. The balance of the exchange is very weak given the volatile circumstances surrounding Pemex’s production.

With the start of commercial operations of the 2.6 Bcf/d Sur de Texas-Tuxpan underwater pipeline, operating conditions have improved throughout the system. However, transportation to the southeast is interruptible. Even with higher output in the southeast, there is no guarantee that Pemex’s incremental production will serve to improve gas availability in the Yucatán. In this sense, covering the decrease in production with higher imports seems to be the viable solution. This entails strategic infrastructure projects given the remoteness of import points.

Cenagas analysis has concluded that the gas shortage problems in the Southeast and Yucatán could be solved with an expansion of the Montegrande interconnection, increasing Sistrangas injections from 500 MMcf/d to 1 Bcf/d with the construction of new compression stations in Tecolutla and Lerdo. This is backed by an economic rationale: it is the option with the lowest cost and with the greatest benefits for users, despite the complications of building in an area known for social opposition to projects.

However, since December 2018, the institutional design of the energy sector has been blurred with CFE now at the center of major decisions. The Energy Ministry (Sener) has thrown everything into the construction of the Dos Bocas refinery, with little time left for coordinating efforts between Pemex, Cenagas and CFE. Regarding gas pipelines, the Cenagas five-year plan no longer serves as a guide on projects to be developed. CFE maintains its own list that it has announced on several occasions and that has little to do with Cenagas.

CFE has emphasized its intention to increase gas flow to the Yucatán peninsula, and the Cuxtal project is an example of effective execution geared towards this purpose. However, how CFE would achieve firm supply into the Cuxtal has not been entirely clear. The newest solution is an extension of the marine pipeline from Texas along the coast into the Yucatán.

In late November, CFE said it had plans to increase supply to the Yucatán by as much as 400 MMcf/d at a cost of $4.5 billion. The chosen solution is a new marine pipeline that runs parallel to the Sistrangas. According to the information corroborated by CFE for NGI, the investment referred to by CFE consists of the development of a natural gas transportation system by sea that would begin in the area of Tuxpan, Veracruz, and would connect with the Mayakan pipeline in the States of Campeche and Tabasco. TC Energy Corp. mentioned this project in its Investor Day, and is set to be the developer, although the project has not yet been formally sanctioned.

Although this gas pipeline is not the lowest-cost alternative, it is consistent with CFE’s position in the last decade of outsourcing its major objectives. Due to the size of the investment, but above all given its benefits, this project would be the most important in the energy sector during the government of President López Obrador, after the Dos Bocas refinery. But the two are connected. The operational viability of the refinery is also at risk if it does not achieve sufficient gas availability for its thermal and conversion processes. From an energy security perspective, the increase in gas availability would make it possible to overcome the critical supply condition in the Southeast while also guaranteeing natural gas to Dos Bocas.

Having more gas in the area would reduce in the order of 60% CFE’s generation costs in the Yucatán. The pressures on Pemex around its operations would be alleviated and imported gas could even complement the volumes it dedicates to its own consumption. Industrial activity in the Yucatán, which can take only 8 MMcf/d today, could expand in sync with the economic growth promised by another of the president’s pet projects, the Maya train.

But there are issues with the potential project. The most objectionable aspect is the project awarding process. In the previous government, the most corrupt in history in the words of the current president, CFE gas pipelines were tendered. In this government, CFE directly assigns contracts. According to law, strategic pipelines such as this one must be tendered in accordance with Cenagas in charge, even if in a joint participation scheme with CFE. Compliance with the law should outweigh TC Energy’s operational effectiveness and prestige, and the good commercial relationship that seems to have been achieved despite previous disagreements. The absence of a competitive mechanism will undoubtedly lead to a degree of regulatory risk. The possibility that this or other governments of Mexico in the future question its validity is already undeniable.

As for the critical aspects, the most relevant is time. In the case of the existing marine gas pipeline, the time elapsed between its bidding and its start of operations was three years, which gives an idea of ​​the prospective terms for the extension to Tabasco and Campeche. In an optimistic scenario, development would begin in mid-2022, without taking into account that procurement may be affected by the breakdown of supply chains for many industrial inputs. In a political environment in which the sole decision-maker and official spokesperson for any government act is the president himself, failure to announce this project in the coming weeks would mean a later start of operations.

If Pemex production keeps dropping, and if the new marine gas pipeline is not executed on time, the probability of supply shortages would persist. Moreover, the supply of gas to Dos Bocas would be uncertain. The strategic decision of a pipeline by sea is not entirely incompatible with other solutions. The most straightforward would be to seek supply via liquefied natural gas in a manner analogous to the scheme that already operates in Baja California Sur. The most prudent would be to expand Montegrande. Regardless, it is clear that the fundamental decisions for the southeast and the Yucatán cannot be postponed beyond the first half of 2022.