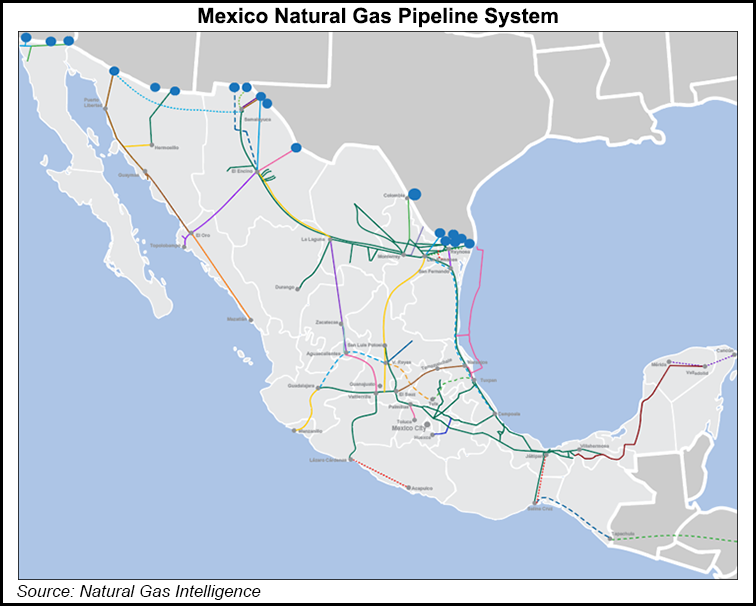 Questions swirl today around what happens when we emerge from our homes. What will the ”new normal’ look like? What will have changed in the world, and what needs to change? Some old paradigms will surely cease to be useful. The Mexican energy market, whose contradictions and fundamental conditions give it a peculiar dynamism, is no exception.

Despite public policy focused on the rescue of Petróleos Mexicanos (Pemex) and energy sovereignty, and a controversial new measure that seems to hinder renewable energies in Mexico in favor of fuel oil, Cenagas and state power company Comisión Federal de Electricidad (CFE) have this year taken small but significant steps towards the formation of a natural gas transportation capacity market. With differing intentions, purposes and mechanisms, both agents have captured the attention of marketers and large gas consumers in recent weeks and the news has been welcome.

One great advance at Cenagas is a new, updated electronic bulletin board (EBB). As of the end of April, it is now easier to review operational and commercial information on the Sistrangas system than ever before. There are also reports on gas quality, information on daily imbalances per user, both for delivery and molecule scheduling, registration of transport feasibility requests, and better updates on nominations and volumes. It is important to point out that this type of transparency is not always the practice of other open access transport companies in the country, despite it being a mandatory requirement.

In the new EBB, Cenagas allows you to access historical information on injections and extractions. Throughout the day, the operating balance parameters are updated several times, making it possible to gauge the health of the integrated system. Obtaining similar data from some private carriers is a laborious task that requires data mining.

The period of Covid-19 confinement has partly coincided with the 2020 contract renewal program in which Sistrangas users have the opportunity to renew their contracts that expire on June 30, 2020. Users maintain their right to the maximum daily amount originally contracted. They also have the option to partially release capacity before signing a new contract. On paper, this measure gives way to a secondary market. This is a norm in the North American market, but south of the Rio Grande, in an uncertain economic environment in which market promotion has recently been rare, this opportunity is not a minor issue.

Throughout May, Cenagas will send a renovation notice to users. In June, renewals must take place so a new term can commence on July 1. The EBB section that has captured the most attention relates to new commercial capacity. There is no open season planned, but rather new capacity is available that had already been assigned via the general process of 2017 and has now been released.

Sistrangas has not changed its operating conditions, nor has it added points available to the public. The commercial injection nodes available comprise entry points in the Reynosa-Argüelles area, in Gloria a Dios, in the vicinity of Cd. Juárez-El Paso and also in areas of national gas production, of which Playuela stands out for being associated with the Ixachi Field’s production. The destination points are not specified, so the final routes are subject to a technical feasibility assessment.

In Playuela, the published amount (38,283 gigajoules) sets conditions so that the commercialization of the incremental gas produced since 2019 occurs with greater operational continuity and with commercial clarity. The fact that the Cenagas EBB is better organized to identify available operating capacity, capacity release, and capacity requests not made effective, suggests that this type of publication will occur more regularly. Thus, a new normal for the commercialization of transport capacity in the Sistrangas seems to be emerging.

In a context of opportunities for shippers, the most relevant question now is what happens with the Montegrande interconnection. This allocation of capacity will have a huge effect on the operating and competitive conditions of the Mexican gas system.

Montegrande, receiving gas from the cross-border marine pipeline that went online last September, is a massive injection that did not exist a few months ago. This capacity requires an open season. For this to happen, the Cempoala compression station must be in operation. The observable flow profiles in the volumes measured in March 2020 suggest that the reconfiguration had not happened as of a month ago, and since then there has been no official announcement.

But in theory it is possible to think that the capacity of the interconnection fully enabled would be 0.5 Bcf/d. The gas shortage in the southeast could be alleviated and the injection from Net Mexico could operate with significant slack. The potential to reconfigure flows in the north could also be seized upon by gas exporters in Texas and gas consumers in the corridor from Monterrey to Torreón and Monclova.

If Cenagas strictly follows the principle of capacity expansion, the route from the marine pipeline that transits through Transportadora de Gas Natural de la Huasteca and flows into the Sistrangas south of Querétaro could also see a similar process. Possibly the same should happen with the Wahalajara-related interconnections in Zapotlanejo and El Castillo. In sum, the changes in the Cenagas EBB may signify the prelude to open seasons that inject dynamism into the market.

Meanwhile, CFE has also launched a natural gas marketing plan with which it intends to make its surplus gas available. Through subsidiaries CFE Energía and CFE Internacional, CFE will extend the benefits of natural gas to the private market by marketing its surpluses in both Mexico and the United States.

In a document that is not yet public, but has been disclosed by several representatives of companies that are considered as potential customers, CFE describes a marketing strategy that will follow two tracks. In low demand areas, capacity will be made available through direct negotiation. In high demand areas, the allocation will take place by auction. The terms will range from one to three years and the capacity will be divided into sizes of 10,000, 20,000 and 30,000 MMBtu. Available capacities will vary from year to year through 2024.

The plan promoted by CFE is a nod to the private sector that may be advantageous for the state company and for consumers as a whole. It can also be used as a lever in promoting the use of natural gas in areas with non-existent demand such as the Pacific coast. Temporary transfer of capacity can alleviate CFE’s strained finances and ease the transfer of costs to captive counterparties, such as the same company’s generation divisions, and some independent power producers.

Although its strategy is mainly focused on pipelines that do not belong to Sistrangas, the assignment or release would have an immediate impact corresponding to injections throughout the integrated system managed by Cenagas. Yes, a public and massive dissemination mechanism would be appreciated by all, but if the CFE plan were to materialize in tangible agreements, the achievement may be enough to make the opening of the Mexican gas market to more players irreversible.

Perhaps the new normal will not be that of a competitive, efficient and transparent market, but new capacity contracts could change the discourse around private pipelines being unfair to the state. That simple fact is an advance. In times of scarce good news, small, even imperfect measures deserve to be appreciated.