Arctic cold that has gripped much of the nation this month has strained Columbia Gas Transmission Corp. (TCO) natural gas storage operations, but the company has seen only minor glitches — and sharply higher gas prices — as a result. 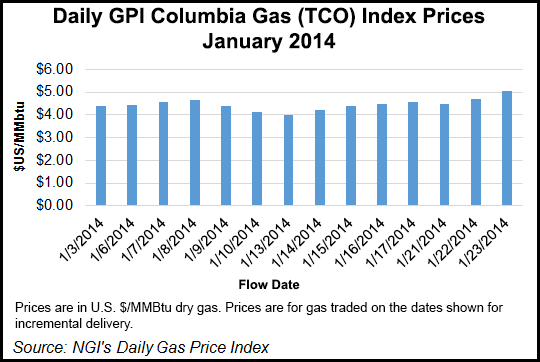 Even before the polar vortex roared south twice this month, it had been an unusual winter for natural gas storage, according to John Shelton, TCO storage director. The year ended with the largest November-December withdrawal from storage since 2000, due in large part to the coldest November in TCO’s operating region since 1996.

But that was just a prelude to huge numbers in the new year. TCO, which has one of the largest storage operations in the Northeast, saw 4.1 Bcf drawn from storage on Jan. 6 and another 4.4 Bcf on Jan. 7. The typical January daily withdrawal is about 1.9 Bcf.

“These were the coldest temperatures we’d seen on the TCO system in 20 years, and it was cold across the entire system — particularly cold in Ohio, but cold all the way through into southeastern Virginia, the Washington and Baltimore areas — the whole system was cold,” said Bruce Ruhlin, managing director of gas control and planning, during a conference call with customers Thursday afternoon. Toledo experienced 36 consecutive hours below zero, for example.

Twice this month a polar vortex has sent temperatures across the country plummeting, with natural gas prices spiking as a result (see Daily GPI, Jan. 21a; Jan. 16; Jan. 7). Prices into TCO reached an early monthly high of $4.63/MMBtu for gas flow on Jan. 8, before settling back below $4.00 mid-month. However, prices into TCO have been on a steady climb higher since, and settled at $5.06 for Jan. 23 flow. That is the first time TCO has broken the $5 mark since June 2011.

“This was the really the first good, hard, cold weather test that we’ve had in a good while as a test of our whole system…We work all year to get ready for these sorts of things,” Ruhlin said. “We did perform pretty well during this cold spell, I thought. It’s always a good test for us, and I thought we came through pretty well.” Problems in the TCO storage and transmission system during the cold snap were minor, he said.

The current bout of extreme cold, coming so soon after the first polar vortex and so early in the winter, and forecasts of continued cold extended across the next few weeks, could be problematic for TCO.

“We’re concerned that that will lead to continued heavy pull from these storage fields, and we will be losing storage deliverability without periods of rest or pressure recovery for those fields,” Ruhlin said.

On Thursday, TCO extended critical days for storage and transportation that had already been called this week for Tuesday through Friday to include Saturday, Sunday and Monday, and it said it was “evaluating the need for critical days in storage and transport beyond Monday, Jan. 27, and will notify customers as soon as possible.” TCO said it would also enforce specialized receipt required at the Cecil, Paulding and Lebanon pipeline interconnects in Ohio for Saturday, Sunday and Monday.

“Earlier this month during the polar vortex extreme cold and once again this week during another bout of extreme cold, we called critical days for storage in order to protect against excessive withdrawals. With relatively low storage inventories and a significant portion of the winter yet to come, we expect we may have to call additional critical days in the future unless the storage withdrawals moderate significantly,” Shelton said.

TCO this week also issued a request for bids to buy and sell gas in February to serve “operational needs” (see Daily GPI, Jan. 21b).