Colorado’s proposed Greenhouse Gas (GHG) Pollution Reduction Roadmap should be sector- and technology-impartial, incentive-driven and as flexible as possible, while considering the potential economic impacts on all stakeholders, according to the American Petroleum Institute Colorado (API CO). 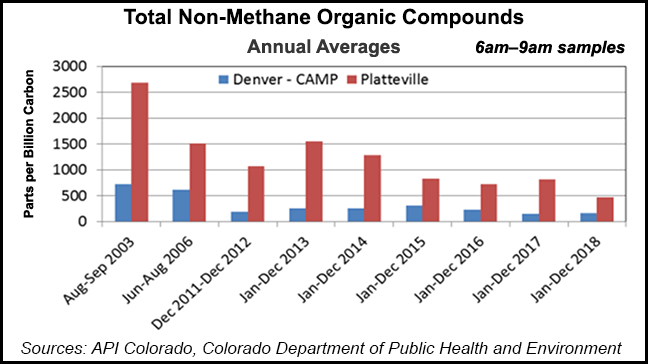 Granger said that while API supports Colorado’s efforts to reduce GHG emissions, “policymakers should keep in mind that these actions and policies need not be prescriptive or overly burdensome – policies should be supportive and flexible.”

“To that end, API CO urges the State of Colorado to consider how it can achieve its climate ambitions while maintaining the State’s economic competitiveness and doing so without undue harm to its consumers, workers and businesses.”

The current version of the roadmap applies deeper reduction targets to the oil and gas sector because of challenges in abating emissions from other sectors, Granger said. “One sector should not be targeted for GHG emissions reductions without further analysis.”

Granger also called on policymakers to recognize the “extraordinary emission reductions” by oil and gas companies in recent years, noting the steep decline in non-methane organic compounds (NMOCs) in oil and gas-rich Weld County versus the Denver area between 2003 and 2018.

“Although the NMOC values do not include methane, NMOC and methane are emitted together at oil and gas sources and the emission controls used to reduce NMOC have the co-benefit of reducing methane emissions,” Granger explained.

She noted that over the same span, Weld County natural gas and oil production rose by about 290% and 1,400%, respectively.

The draft roadmap as written does not make clear what methods and criteria will be used to determine the technical feasibility and economic reasonability of the emission reduction targets, according to Granger. Nor does it clearly define which industry segments are included within the “oil and gas industry” definition.

Granger added that GHG emissions targets should not be technology prescriptive, explaining that policies that prescribe specific technologies to reduce emissions “may inhibit the development of alternative technologies that could accomplish those same goals at lower costs or improved timetables.”

The roadmap also should consider “opportunities and incentives for investment in the piloting of newly developed technologies across all economy sectors to evaluate their performance and potential for deployment.”

She warned that oil and gas production in Colorado “should not be forced out earlier than the market would allow,” citing the important role of natural gas in the transition to a low-carbon economy.