A bill in the lower house of the Colorado state legislature that narrowly passed out of committee earlier this month has caused concerns by the state’s two main industry trade associations, who fear a chilling impact on oil/natural gas activities, including hydraulic fracturing (fracking). 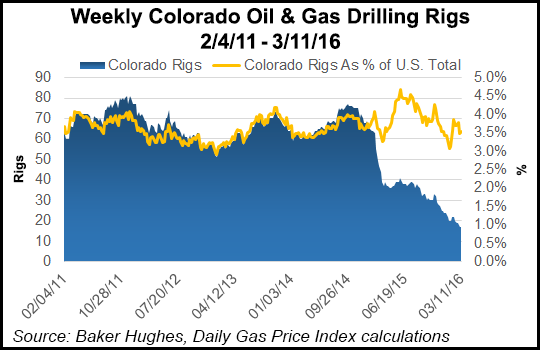 The bill “holds oil and gas operators strictly liable for their conduct if oil and gas operations, including a hydraulic fracturing treatment or reinjection operation, cause an earthquake that damages property or injures an individual,” according to draft language in HB 1310. The bill attempts to specify acceptable conduct by oil/gas operators and give landowners more recourse when the conduct harms the land, people on the land or the surface owner’s property.

Colorado Petroleum Council Executive Director Tracee Bentley called the bill “an anti-consumer proposal” that is not based on science and should be rejected. Bentley called HB 1310 “extreme” in its scope and potential economic harm.

“This is part of a political agenda to restrict energy development in Colorado, and could raise energy costs and destroy high-paying Colorado jobs,” she said.

Doug Flanders, policy and external affairs director for the Colorado Oil and Gas Association (COGA), expressed disappointment that the measure was passed out of the House Health, Insurance and Environment Committee on a slim 7-6 vote, despite what he called opposition from a broad coalition of business leaders and organizations.

“[The measure] ignores 70 years of legal precedent as applied to the liability of oil/gas companies in Colorado,” Flanders said. HB 1310 would vacate negligence requirements, but imposes strict liability, placing operators in a position the COGA representative called “being automatically liable unless they can prove otherwise.”

Both COGA and the council, which is part of the American Petroleum Institute (API), stressed that the state already has what they consider the most rigorous oil and gas regulations in the nation. Colorado’s approach has been called a model for other states and countries, according to Flanders and Bentley.

Five years ago, the Colorado Oil and Gas Conservation Commission enacted Rules 205 and 341, which require operators to inventory chemicals kept at well sites during operations, and to monitor and record pressure on the well casing during fracking operations, with operators reporting readings greater than 200 psig to the state agency (see Daily GPI, Nov. 23, 2011).

“We should be working to find ways to help the industry thrive, not hinder progress,” Bentley said.

Calling HB 1310 a “solution in search of a problem,” Bentley said the last thing that Colorado needs is “unsubstantiated and costly regulations that could increase the cost of energy for consumers and undermine our competitiveness as an energy leader.”