Colorado’s natural gas and oil industry has faced pressure from all sides in recent years, reviled by landowners and litigated by environmental groups, but Gov. Jared Polis has shown he can compromise, PDC Energy Inc. executives said last week. 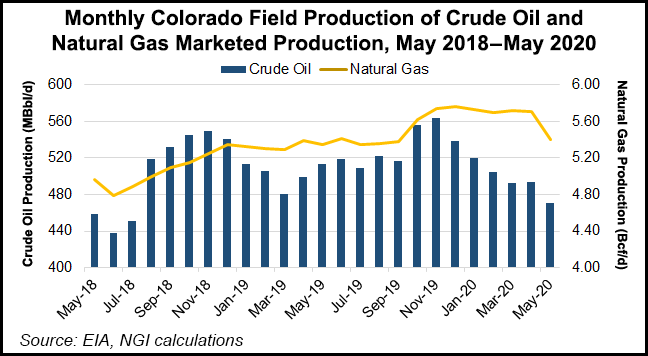 About two weeks ago Polis wrote an editorial piece published in the political and public policy news journal, Colorado Politics. He noted that in recent years the conflicts between the energy industry, landowners and environmental groups have resulted in “expensive, divisive fights at the ballot box and the courtroom,” none of which satisfied the opposing parties. However, there is a path forward, he said.

“In conversations I’ve had with industry and environmental groups, both have committed to me a willingness to let Senate Bill (SB) 181, the landmark oil and gas legislation enacted in 2019, work through the regulatory process,” Polis wrote. “These groups have committed to withdraw current ballot measures filed for 2020 and have expressed a willingness to work together to prevent future ballot measures through 2022.”

SB 181 established a full-time, professional Colorado Oil and Gas Conservation Commission (COGCC), which is overseeing the regulatory framework. The governor said the COGCC must be allowed to do its job

“Therefore, I will actively oppose ballot initiatives related to oil and gas extraction in 2020 and 2022 from both sides,” Polis wrote. Disagreements about projects now are to be resolved by the COGCC “and by the decision makers closest to the ground — local city councils, mayors, commissioners — who are deeply involved in all land-use decisions that impact the quality of life of their constituents.”

Brookman, who with his peers has faced ballot initiatives that have sought to allow local jurisdictions to dictate to the industry, saluted the governor’s support.

“While this doesn’t guarantee the opposition won’t attempt to gather signatures in two years, it is clearly the…most public support the industry has had from the governor’s office in recent memory,” the CEO said. The support “should go a long way and limit the outside funding and support that is necessary to run an anti-industry campaign.”

Additionally, he said, PDC expects to have more than 400 combined drilled but uncompleted (DUC) wells and approved permits, “which equates to over three years of future turning inlines. We look forward to working closely with the COGCC and its new commissioners as SB 181 is implemented and the rulemaking process continues forward….

“The takeaway here is that the recent news from the governor’s office, combined with our anticipated permit and DUC count, positions PDC to safely and effectively develop our position and deliver clean and affordable energy for years to come.”

Some rules under SB 181 have been finalized, which included establishing a “full-time, professional” COGCC, Brookman said. “We feel comfortable with all of the negotiations” and optimistic with oversight by a professional rulemaking group.

“We’re going to be able to comfortably comply,” Meyers said. “It’s obvious we didn’t get everything we wanted, but again, the compliance is what we’re most focused on, and so that’ll start here in the very near future.”

The next rulemaking process is slated to be completed in October “if everything stays on schedule,” Meyers said, but the pandemic “has made this very difficult…But that’s what we’re expecting. We’ll get a real feel for how that entire relationship goes with the commission…as we go through that process.”

Brookman said Polis stressed “collaboration,” and he intended PDC to do the same. “I look forward to working with his administration on this mission.”

Regarding second quarter performance, the CEO said there were “multiple challenges,” but the revamped business plan as the coronavirus eclipsed demand was quickly adapted by employees.

“From a risk perspective, we are experiencing a much improved midstream, operating and regulatory backdrop in Colorado that enhances our confidence in achieving our business objectives.”

PDC exited June with no completion crews. There was one rig working the Wattenberg field in the Denver-Julesburg (DJ) Basin and none running in the other major platform, the Permian Basin’s Midland formation.

Production for this year is estimated at around 67 million boe/d, which is the midpoint of guidance, Brookman noted.

Going forward from a cost perspective, the company is expected to be under $5.00/boe for combined lease operating and general/administrative expenses. Capital expenditures for the year are now set at $500-$550 million, 50% lower than original guidance provided in February and off 5% from an updated forecast in May.

In the Wattenberg, PDC plans to operate one rig for the rest of the year. DUCs should begin to be turned online “late in the third quarter, assuming commodity pricing supports such a decision,” the CEO said.

In Delaware, the capital program “was largely completed for the year in the second quarter, with the expectation to spend less than $20 million on various leasing and other projects the remainder of the year.”

PDC is projecting it will reach more than $300 million of free cash flow by the end of the year at $2.00/Mcf gas prices, $35/bbl West Texas Intermediate oil,  and natural gas liquids realizations of about $9.00/bbl.

“From a production standpoint, it’s important to remember that we entered the quarter operating two Wattenberg completion crews and continued at that pace for a period of time before exiting June with no crews,” Meyers said.

The curtailments enacted during the quarter “were a bit biased toward oil” he said, with around 15% of volumes shut-in, but overall, only 10% of total output. As it nears the third quarter halfway mark, most of the curtailments have been lifted.

Net losses in 2Q2020 were $222 million (minus $2.23/share), compared with year-ago profits of $69 million ($1.04). The year/year loss was attributed to the decline in sales volumes and a commodity price risk loss on hedging.