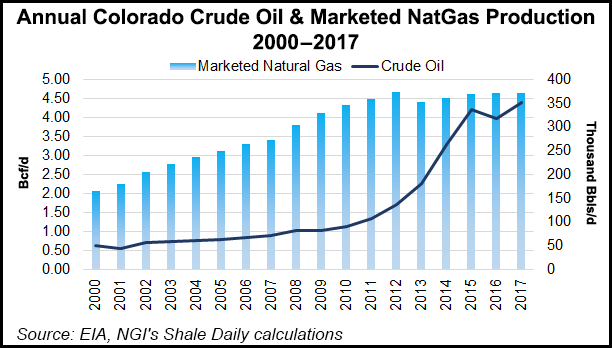 The lawsuit is led by hip-hop artist Xiuhtezcatl Martinez and was brought on behalf of teenagers living in Colorado who are fighting the effects of fossil fuels extraction.

The case originally was filed in 2013 and requested the COGCC consider a proposed rule that no new permits for oil and gas drilling be issued “unless the best available science demonstrates, and an independent third-party organization confirms, that drilling can occur in a manner that does not cumulatively, with other actions, impair Colorado’s atmosphere, water, wildlife, and land resources, does not adversely impact human health and does not contribute to climate change.”

When COGCC declined to adopt the rule, the plaintiffs appealed, with support from the Oregon-based group Our Children’s Trust, which has pushed for environmental and health protection in 44 states.

The Colorado Court of Appeals in a 2-1 decision last year said public health and environmental protections clearly must be in place before any new oil and gas drilling is allowed. Colorado in 2007 had altered the mission of the agency so that it would consider public health, safety, environmental and wildlife issues in relation to development of oil and gas natural resources.

The COGCC then voted unanimously to appeal to the Colorado Supreme Court to gain “clarity.” While Gov. John Hickenlooper said at the time the COGCC lacked statutory authority to challenge the court’s interpretation, Coffman disagreed, claiming the ruling would change the state’s Oil and Gas Conservation Act.

“For years, the commission has interpreted the Act to require a balance among policy objectives, including both the development of oil and gas resources and protection of the environment,” Coffman said Tuesday in her 68-page brief.

“In this case, the commission was presented with a rulemaking request that sought a dramatic departure from this settled understanding. For example, the request urged the commission to halt oil and gas production across the entire State of Colorado.

“State law creates a balance between development of Colorado’s oil and gas resources, which are tremendously important to our economy and serve as a source of reliable energy, and our other core values, including environmental protection. As Coloradans, we should continue to engage in public debate on issues of statewide significance.”

Colorado administrative agencies have broad discretion to decide whether to pursue a rulemaking based on a request by a member of the public, she noted. The COGCC could have denied the request summarily, as other state agencies have done when presented with similar rulemaking requests.

Instead, the COGCC “engaged in a thorough public comment process, through which it heard from dozens of stakeholders as well as some of the state’s leading environmental experts,” Coffman noted. “Based on the nearly 1,200-page record developed through that process — and pursuant to the commission’s longstanding interpretation of the Act — the commission issued an order declining to engage in rulemaking.”

“An unprecedented decision from the Colorado Court of Appeals threatens to shut down all new oil and gas development in Colorado due to alarmism over so-called climate change.”

Our Children’s Trust attorney Nate Bellinger countered that environment and public safety “is obligatory and not a factor to be balanced.”

The role of the courts “ is to follow the will of the general assembly,” Bellinger said. “And the COGCC is not doing that. We are asking the agency to do what the lawmakers told them to do.”

“State lawmakers changed the law in 2007 because they wanted to put the public health, safety and welfare, and protection of the state’s wildlife resources, first and foremost in the Colorado Oil and Gas Conservation Commission’s considerations,” EarthJustice attorney Joel Minor said. “That’s what the text of the statute says. That’s what the court of appeals decided. That decision was correct.”