In an unsurprising move, natural gas futures bounced back from a four-day decline to finish the week firmly in positive territory. With a boost from technicals, colder changes in the weather models sparked a 7.6-cent rally for the January Nymex gas futures contract, which settled at $4.132. February also climbed 7.6 cents to $4.073. 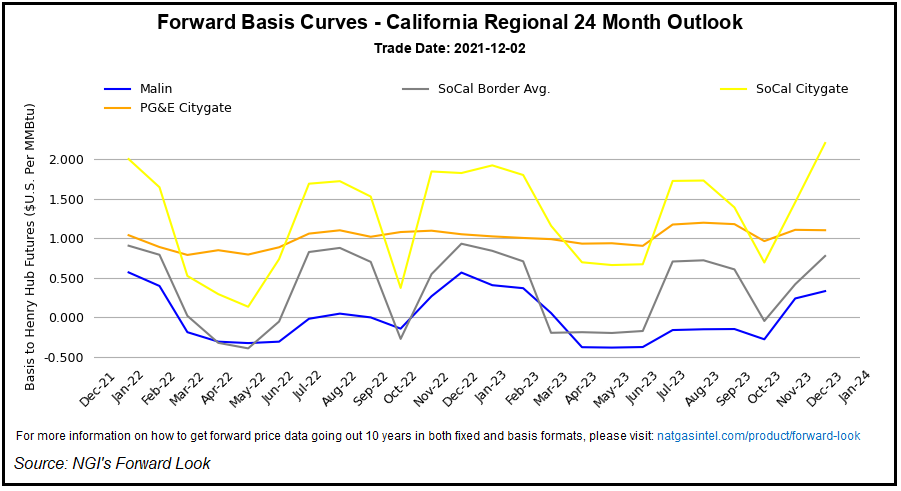 After plunging a steep $1.42 over the past four trading sessions, the January contract was poised for a recovery. A colder turn in the overnight weather models sealed the swing to the upside, with futures opening about a nickel higher day/day on the added heating demand in the long-range forecasts. Despite the gain in projected demand, the weather pattern overall continues to favor below-normal heating needs, with forecasters still calling for December to rank in the top five warmest on record.

Bespoke Weather Services said given the look of both the Pacific and Atlantic sides of the pattern heading into the middle of the month, risk remains to the warmer side in that time frame. Furthermore, the pattern still looks to be in “warm mode” at the end of the forecast period, making it likely that days beyond Dec. 17 would continue to roll in with weak demand. “…Any potential material change in the pattern seems unlikely until at least the end of the month,” the forecaster said.

Noting the bounce back for natural gas prices, Price Futures Group’s Phil Flynn said the flip-flopping weather forecast has kept natural gas traders “on guard.” The market looked “extremely oversold” and now appears that it may find some support and start to rally again, according to the analyst.

“We think that natural gas should be bought on breaks, but be very cautious as the weather seems to be a major factor in Europe,” Flynn said. “Of course, tensions with Russia continue to be running high.”

To be sure, global gas demand has flexed its muscles in the U.S. market throughout the summer and fall as Asia and Europe battle for liquefied natural gas (LNG) cargoes. Asia’s need for Atlantic LNG cargoes is keeping price spreads high between the Japan Korea Marker and Title Transfer Facility through peak winter, according to Energy Aspects. The firm said the spread blowout continues to be supported by record-high freight rates resulting from increased trade year/year, longer average distances globally and newly signed term charters that have reduced spot shipping availability.

“We expect January 2022 to be an extremely tight month for Asia-Pacific,” Energy Aspects analysts said.

The consultancy expects around 65 U.S. LNG cargoes would need to go to Asia. Not only would this mark a peak for Panama Canal congestion, but it is close to the 65-70-ship range the firm considers to be the cap on U.S. LNG availability.

“Thus, we see a risk — for instance in the case of a cold winter, or additional supply disruptions — that Asia could exhaust the U.S. LNG available to go cross-basin and instead rely on European LNG reloads at the margin.”

That would not bode well for Europe, where storage inventories have lagged considerably, demand has ramped up on cold weather and any uptick in Russian supplies has been limited. Tudor, Pickering, Holt & Co. (TPH) analysts said through November, European storage is down 353 Bcf versus a 5-year average of 240 Bcf. In recent days, Russian flows have trended toward 14 Bcf/d versus a roughly 13 Bcf/d average in November, according to TPH, but there’s little indication of a material shift progressing through December.

On the demand front, tracked European demand jumped to around 61 Bcf/d in recent days versus a November average of 48 Bcf/d, according to the TPH team. Preliminary modeling points to around 56 Bcf/d of demand for December, with little demand destruction to be seen despite elevated price levels, “suggesting it could be a long and pricey winter for the European gas market.”

The global market’s unrelenting demand for molecules ahead of the peak winter season is a far different scenario than what is playing out in the United States. Though robust LNG demand created some earlier concern that U.S. supplies would be strained this winter, the continuation of mild weather into December has rapidly flipped the script when it comes to domestic supply.

The latest government storage data was a bit more supportive of prices, with the Energy Information Administration (EIA) reporting a larger-than-normal 59 Bcf withdrawal for the week ending Nov. 26. The draw expanded the deficit to the five-year average to 86 Bcf as inventories fell to 3,564 Bcf.

However, market observers have been quick to point out the potential for a string of lighter-than-normal withdrawals in the coming weeks. As a result, estimates on where inventories may sit at the end of winter have risen sharply.

EBW Analytics Group said its end-of-March storage trajectory has swelled north of 1,575 Bcf following the dramatic loss of demand in recent weather models. Since early September, the combination of the second-warmest October in history, resurgent natural gas production in early November, inconsistent LNG feed gas during the fall shoulder season and a mild start to December have collectively lifted the end-of-winter storage trajectory by 375 Bcf.

“Further, in addition to a rising most-likely scenario March storage exit, the risk of extreme outcomes has plummeted as the winter has progressed without significant bullish developments,” EBW senior analyst Eli Rubin said. “Even over the past week alone, the risk of March storage falling under 1,000 Bcf in our Monte Carlo storage analysis has fallen sharply from 18% to just 12%.”

TPH analysts said the balmy outlook is setting the stage for residential/commercial demand to shift to around 1 Bcf/d lower than the five-year average for the coming week. This compares with the reference week in the latest EIA report, which saw around 4 Bcf/d above-average demand.

For the next EIA report, robust power generation is driving the TPH team’s preliminary modeling toward a 56 Bcf draw, in line with the five-year average.

Most U.S. cash markets continued to soften on Friday, with the stout gains seen in the Northeast on Thursday quickly dissipating despite ongoing chilly weather in the region.

The price discounts occurred as the National Weather Service (NWS) said New England was in store for more cold and blustery northwest winds. In addition, persistent lake effect snow showers are possible through early Sunday, along with a few inches of snowfall likely across the eastern Upper Peninsula of Michigan and the Tug Hill Plateau of New York.

Meanwhile, an upper level disturbance entering the Northwest is set to combine with an Arctic air mass located just north of the U.S.-Canada border to allow for some snowfall to develop over the Northern High Plains early Saturday, according to NWS. Snow is also likely across the far Northern Rockies and the Washington Cascades.

By Sunday, a developing area of low pressure over central Montana is expected to move east with the associated precipitation, leading to a swath of moderate-to-heavy snow from northeast Montana to northern Minnesota.

Elsewhere across the country, sunshine and warmth are set to continue, limiting any need for heating and sending prices lower again. Price decreases in the Southeast and across Louisiana were limited to around 20.0 cents, as were those in the Midcontinent and Midwest. Henry Hub spot gas was down 18.5 cents to $3.855 for the three-day gas period.

However, Wood Mackenzie said as of Dec. 1, inventory levels at Aliso Canyon were at 41.61 Bcf, slightly above the agreed maximum.