Double-digit swings marked the final days of trading in 2016 for natural gas forwards and futures markets as the second 200+ draw from storage and forecasts of widespread cold to blanket much of the U.S. beginning late in the coming week ultimately sent February prices up an average of 28.5 cents between Dec. 23 and 29, according to NGI Forward Look. 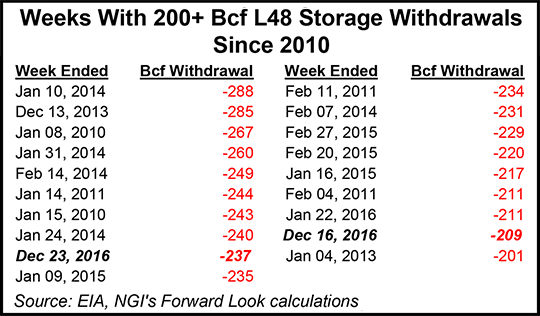 NGI did not publish price data on Monday, Dec. 26, in observance of the Christmas Day holiday.

Near-term, most models agree that cold will dominate the second week of January. The National Oceanic and Atmospheric Administration’s six-10-day outlook showed a high probability for colder-than-normal conditions to dominate the Lower 48. The GFS showed those conditions materializing by Jan. 6 and persisting across the northern tier through Jan. 10.

“Beyond that timeframe, though, revisions to the GFS have fluctuated daily between a prolonged warm spell blanketing the Midwest and East Coast, to seasonally normal temps across those regions,” Louisville, KY-based Genscape said.

Thursday’s storage report from the U.S Energy Information Administration, which showed a whopping -237 draw from storage for the week ending Dec. 23, appeared to to be priced into the markets early as the February contract actually plunged 10 cents that day.

On Friday, the last day of trading for 2016, Nymex February futures were trading another 10+ cents lower at midday.

“The natgas markets are conflicted between milder temperatures favored over the southern and eastern U.S. Jan. 10-13 versus structurally tight supply/demand dynamics bigger picture/longer term,” forecasters at NatGasWeather said. “To our view, we need to be very careful as we expect a frigid pool of Arctic air to remain over western Canada after Jan. 10, which will likely spill into portions of the Northwest and northern Rockies. It could then easily sweep south and east if a mechanism presented itself to release it.”

Although if Arctic air over southwest Canada fails to release, that would be quite bearish as it would mean the mild ridge was holding over vast stretches of the southern and eastern U.S., resulting in lighter-than-normal national natural gas demand, the weather forecaster said.There is considerable risk holding over the long weekend break as a gap on the Mondayevening open would likely be in the direction northern and eastern U.S. temperatures trend, which the data currently favors the milder side, but with caution, it said.

The late-week weakness in the markets could also be due to traders turning their attention to next week’s storage report, which is expected to be considerably smaller than those of the last two weeks.

There were some anomalies, however. Several Northeast locations managed to eke out only modest gains this week, and the usually high-priced Algonquin Gas Transmission citygates softened by more than a dime at the front of the curve.

The weakness comes as Genscape projects demand in New England falling considerably after peaking today at 3.43 Bcf/d. Demand is forecast to fall to 2.74 Bcf/d by Jan. 2 and then climb back to 3.27 Bcf/d by Friday. Genscape shows higher demand during the second week of January, averaging 3.32 Bcf/d for the Jan. 9-13 period.

While weather undoubtedly had a hand in this week’s unusual behavior in Northeast markets, FERC’s pending approval of the Rover Pipeline was also likely at the forefront of traders’ minds. Project backers had requested a FERC decision by this week in a filing earlier this month.

“That is not only the next incremental project out of the Appy, but also a big one — 3.25 Bcf/d,” said NGI Director of Strategy and Research Patrick Rau said. “Remember the major impact Rockies Express had seven years ago? That was just 1.8 Bcf/d. Rover really does have a fairly tight window to get their permits in place if they want to be in service by year end 2017, so anything that threatens that will make folks nervous.”

Rau also noted that Rover’s delay could delay the pace of new drilling and the completion of DUC [drilled but uncompleted] wells. For example, Denver-based Antero has indicated they plan to ramp up Utica activity once Rover starts construction since it will take six to nine months for new wells to reach sales, Rau said.

The 710-mile, 3.25 Bcf/d Rover would connect Marcellus and Utica shale gas to the Midwest Hub in Defiance, OH, and to an interconnection with the Vector Pipeline in Michigan, giving Appalachian producers access to points such as the Dawn Hub in Ontario.

Meanwhile, points along the Iroquois pipeline strengthened considerably as an unplanned maintenance event that was expected to wrap up Dec. 31 was extended to Jan. 8. The extended outage at the Boonville Compressor Station is required due to the vendor’s diagnosis that the turbine and gas generator will need to be replaced. The outage is expected to affect several services utilizing Waddington as an alternate receipt point.

As such, Iroquois Waddington February forward prices shot up $1.17 between Dec. 23 and 29 to reach $8.22, while March forward prices jumped 87 cents to $4.86, according to Forward Look. Summer 2017 forward prices were up more in line with the rest of the country, rising 20 cents during that time.

Meanwhile, Northwest Pipeline-Sumas also strengthened considerably as the West will now become quite cold with frigid air spilling across the region, including cities such as Seattle and Portland, NatGasWeather said. In fact, after climbing to just 2.30 Bcf/d on Dec. 30, Genscape projects demand to soar above 3 Bcf/d on both Jan. 3 and 4 before sliding the rest of the week.