After years of debate and changes, a recent compromise to transform an old natural gas-fired Southern California generation plant into a modern fast-start gas facility is nearing final state approvals that have the support of local officials in Carlsbad, CA, site of the existing power plant. 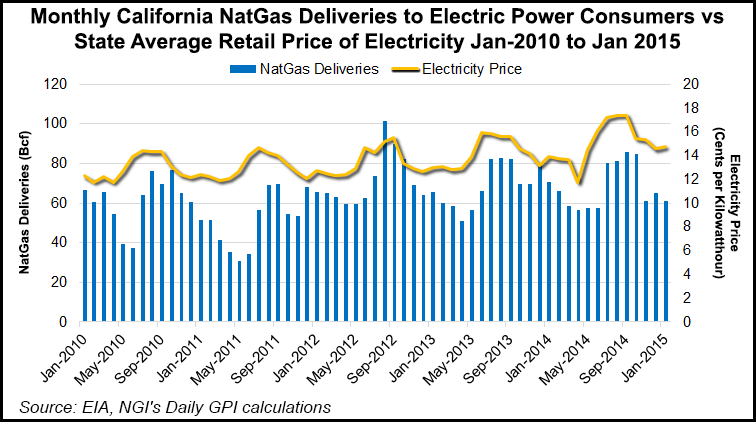 The California Public Utilities Commission (CPUC) is scheduled next month (May 7) to approve a contract between the repowering developer/owner, Princeton, NJ-based NRG Energy Inc., and buyer San Diego Gas & Electric Co. (SDG&E), a subsidiary of Sempra Energy. The plant is slated to be a fast-start, gas-fired set of five peaking units totaling 500 MW located along the coast in North San Diego County

Separately, the California Energy Commission (CEC) staff and local officials in Carlsbad have approved the change of the project from a formerly proposed baseload, combined-cycle gas-fired power plant to the peaking facility, but the full five-member CEC still must formally approve the project, and that won’t happen until later this spring at the earliest.

NRG, a multi-plant operator in California, has been trying for years to construct a $500 million, 558 MW gas-fired plant using 23 acres of the existing 95-acre site for its outdated 900 MW plant, about 20 miles south of the closed San Onofre Nuclear Generating Station, or SONGS (see Daily GPI, June 4, 2012).

The revised CPUC approval is expected to include a provision in which SDG&E will secure another 100 MW of renewable energy or some other “preferred source,” such as demand-side management programs or energy storage, as part of the OK for the 500 MW of gas-fired electricity.

A CEC presiding members’ committee will hold a hearing on the latest project proposal April 17, following two days of evidence-gathering hearings earlier this month that resulted in a final staff assessment (FSA) that concludes the project meets 19 mitigation standards. The FSA is a guide for, but not binding on, the CEC members ultimately deciding the fate of the project.

The existing plant is slated to be closed in 2017 to meet the state’s ban on the use of ocean water-cooled power plants, of which there are about 20 statewide. The proposed peaking units will be air-cooled, said a Houston-based spokesperson for NRG, adding they will take up a relative small portion of the existing site and be placed below ground level.

“The city of Carlsbad is 100% onboard with the project,” said NRG’s spokesperson, citing a March 26 letter from city’s mayor pro tem, Keith Blackburn, to the CPUC. It supports an alternate proposal from CPUC President Michael Picker that would override a regulatory judge’s proposed decision rejecting the contract signed by SDG&E for supplies from the peaking facility, alleging that the utility needed to consider various preferred power supply sources, such as renewables, before accepting the NRG deal.

Picker earlier this month came up with the alternate decision calling for 500 MW of gas-fired peaking power, conditioned on the reduced gas-fired capacity and SDG&E obtaining 100 MW of the preferred sources.

Noting that NRG is already operating wind and solar projects, along with marketing rooftop solar systems in other parts of the state, NRG West Region President John Chillemi said the current proposal provides the needed “balance of fast-start, flexible gas generation.” Chillemi called the project “critical for local reliability in the San Diego area, given the retirement of SONGS and the scheduled retirement of the existing Encina plant in 2017.”

If the revised project goes ahead, eventually, there will be an SDG&E regional service center and a privately developed desalination plant built on other parts of the existing power plant land with the rest — including some prime oceanfront property — being up for possible sale by NRG for commercial development.