Appalachian pure-play CNX Resources Corp. said Wednesday that it’s net carbon negative for Scope 1 and 2 emissions, stressing a “tangible” accomplishment at a time when its peers are advancing ambitious goals to cut environmental footprints in the future. 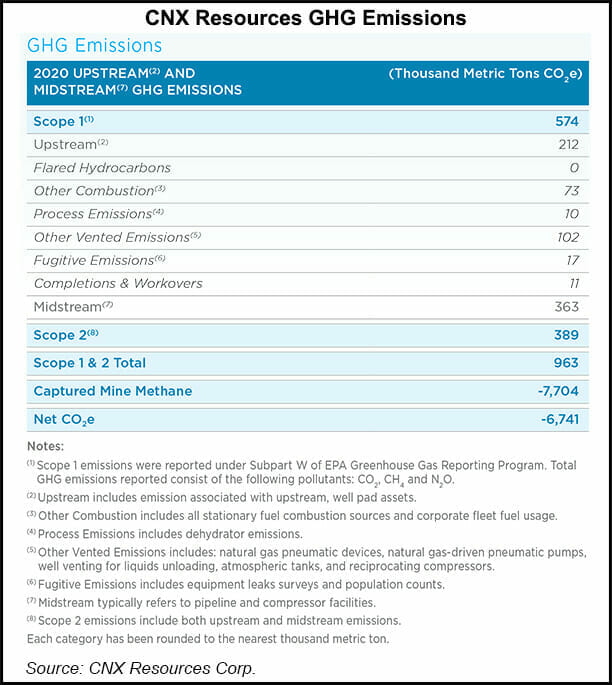 Announced along with the release of its corporate responsibility report, the company said it believes it’s the only oil and natural gas producer or midstream operator that can currently claim net negative carbon emissions — not carbon zero, or carbon neutrality.

“Many in the energy industry and capital markets continue to speak in the abstract and distant future about ESG, sustainability, resiliency, carbon intensity and the industrial logic of consolidation,” said CEO Nick Deluliis. “CNX pursues a different path: one that prioritizes the development of our extensive existing asset base over further scale, and that focuses on transparency, measurable outcomes, current and nearer term deliverables, and long-termism defined by growing per-share intrinsic value.”

Deluliis, an outspoken critic of aspects of the environmental movement, called the company’s environmental, social and governance (ESG) strategy “tangible, impactful and local” in its approach.

CNX said it’s net negative carbon because it prevents over 300,000 metric tons of methane emissions annually, or roughly 7.5 million metric tons of carbon dioxide equivalent (CO2e), an amount that exceeds direct emissions from its operations. The company said it has achieved negative carbon by adopting the Task Force on Climate-Related Financial Disclosures’ framework, divesting inefficient conventional assets, separating from the coal company it was once a part of and utilizing technologies to curb emissions.

Last year, CNX emitted 963,000 metric tons of CO2e from its Scope 1 and 2 operations, the bulk of which came from its upstream and midstream assets. Scope 1 emissions are those that a company directly controls, while Scope 2 emissions are indirect and associated with the purchase of electricity, steam, heat, or cooling.  CNX captured more than 7.5 million metric tons of CO2e during 2020 from coal seams in Virginia, where it holds 283,000 net acres of coalbed methane (CBM) production rights.