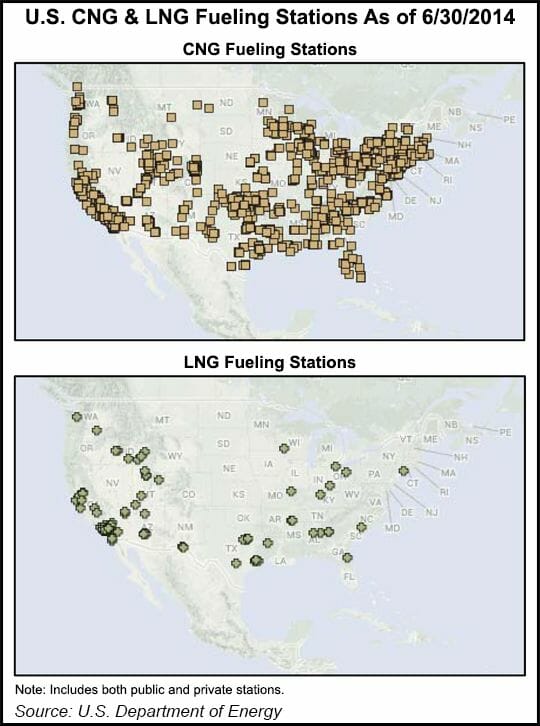 Todd Thurlow, a Pace Global vice president, has analyzed major segments, including oil/natural gas drilling operations, trucking fleets, marine/rail transportation, and mining, each of which offers opportunities for both CNG and LNG applications. Each segment has its own challenges and opportunities, Thurlow said in a recent webinar.

While talking about a current “pause” to allow demand to catch up with natural gas supply (see Daily GPI, June 26), Thurlow noted that nearly half of the newest Cummins Westport ISX-12G dedicated natural gas engines produced since last summer were configured to run on CNG. That should assist natural gas penetration into the heavy-duty trucking market, he said.

“Typically the thinking has been that CNG is more appropriate for light-duty, medium-duty back-to-base fleet operations, but due to a number of factors, including the innovations around fuel tanks to make them lighter and larger capacity, CNG has become more of a player even in the heavy-duty market,” he said.

Another factor helping push CNG is the fact that there are more than 700 public fueling stations nationally, compared to 93 for LNG trucks, said Thurlow. The CNG network continues to expand and its overall cost is cheaper than what he called “fully burdened” LNG conversion costs, he said.

“You have to factor in the capital cost of liquefaction plants in LNG use. So, for the future of CNG-versus-LNG, industry experts have differing opinions. They think LNG will continue to dominate the heavy duty segment because of its range benefits, but CNG certainly has become more competitive.”

Indicative of that, the end of June saw a flurry of CNG fueling advances, including South Carolina-based Mainstay Fuel Technologies announcing that it was expanding its relationship with Watson Engineering to have Watson provide components and fabrication services for Mainstay’s onboard CNG fuel storage and delivery technology for heavy duty trucks.

Elsewhere, from Oregon to the Midwest, new CNG fueling locations were being opened. Truck ‘N Travel opened its first public access CNG fueling station in Oregon in the university city of Eugene. The station operator said the new location cost about $500,000.

In Kansas, Hutch’s, Black Hills Energy and Sparq Natural Gas combined to develop a CNG station scheduled to open July 1 in the southwest portion of the state. In Tennessee, Midwest Energy Solutions announced it has worked with a local utility district to design a new CNG station in Trenton. The public-sector utility’s governing board last Tuesday approved moving ahead with the fueling station.

Midwest Energy serves as a “station-starter,” according to it marketing director, Mark Watkins. The company is a distributor for all of the major CNG equipment manufacturers.