California-based Clean Energy Fuels Corp. on Tuesday marked its results from the first half of this year, saying they have resulted in the opening of 27 new natural gas vehicle (NGV) fueling stations and the expansion of another 10. Nine of the facilities are part of the nationwide effort to create America’s Natural Gas Highway (see Daily GPI, Aug. 25, 2011). 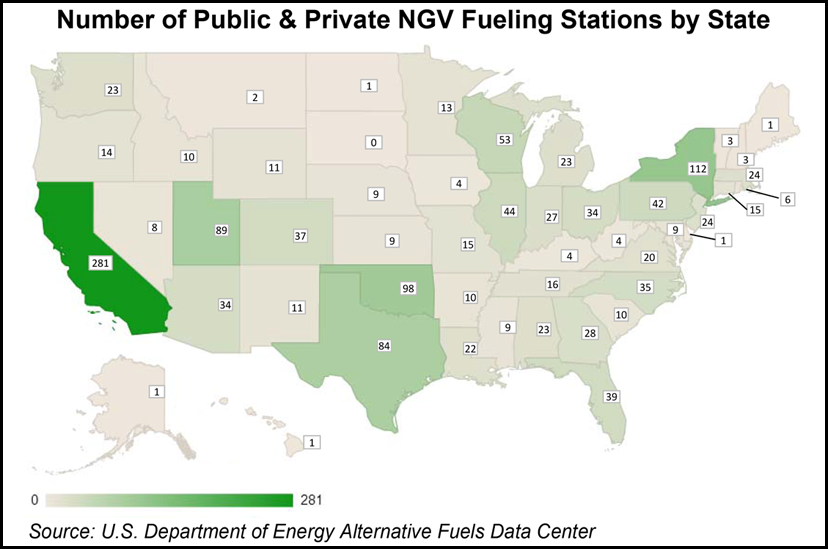 The company has new deals expanding an existing agreement with Raven Transport, which plans to add 33 heavy-duty LNG trucks in the Southeast region of the United States. Clean energy is supporting this effort with a public access station in Albany GA, and other similar facilities in Franklin, OH; London, OH; Walton, KY; and Jacksonville, FL.

In Gaston, SC, G&P Trucking is scheduled to add another five LNG-powered trucks, doubling its NGV fleet to 10 by year-end. “Clean Energy will support this NGV fleet by opening an America’s Natural Gas Highway facility in Charlotte, NC, later in August,” a Clean Energy spokesperson said. “This station in conjunction with Clean Energy’s Latta, SC, station bolsters the region’s LNG capability to serve goods movement hubs in the Southeast, such as the South Carolina Ports Authority.”

“More of our customers are pursuing natural gas fueling solutions to meet sustainability goals,” said G&P Trucking President Clifton Parker. “As Clean Energy continues to open its natural gas highway, you can bet our trucks will be fueling on it.”

Two other network agreements were noted by Clean Energy, one with a Missouri school district, and the other with the City of Ontario, CA.

Parkway said the cost of the CNG fueling and buses was offset by a $1.5 million federal highway grant. Scott Bennett, the Parkway district’s manager of planning and engineering, said the district has contracted with Clean Energy to manage and maintain the storage facility.

Meanwhile, in Ontario, CA, about 40 miles east of downtown Los Angeles, the city plans to double its NGV truck fleet to 10 by the end of this year. Clean Energy built and operates and maintains the city’s CNG fueling station that boasts four private station fast-fueling bays, along with two others dedicated to public use.

The Ontario station ultimately will supply about 500,000 gasoline-gallon-equivalent volumes of CNG annually, Clean Energy said, adding that this volume of CNG displaces about 1,054 metric tons of greenhouse gas emissions.