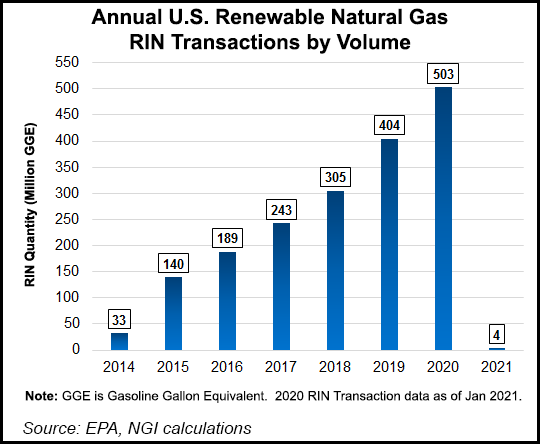 The Newport Beach, CA-based operator agreed to provide an estimated 47.5 million gallons of RNG for the 2,400-bus fleet as part of a contract that runs through 3Q2022.

The supplies are to come from a nationwide network of RNG suppliers. More recently, Clean Energy opened a fueling station in Whittier, CA, for the Los Angeles County Sanitation District.

In other news, Southern California Gas Co. (SoCalGas) has donated $1.3 million to support four hydrogen fuel technologies that could allow emissions-free railways and ports in California.

The Sempra Energy gas-only utility aims to help bring the technologies to market for fuel cell applications in marine vessels, refueling and locomotives. The California Energy Commission (CEC) selected the technologies as part of its hydrogen fuel cell demonstration program.

In addition, the CEC has a $44.1 million research effort underway to support large-scale deployments of on-road, zero-emission Class 8 drayage and regional haul trucks, and zero-emission vehicle fueling infrastructure. Natural gas, electric and other alternative fuel technologies are eligible for the effort; CEC closed the bidding process in early February.

Elsewhere, C-Zero Inc., backed by the Department of Energy, is working to bridge the gap between existing natural gas infrastructure and a low-carbon future that includes hydrogen. C-Zero has won federal grants for pilot hydrogen and fuel cell projects with Pacific Gas and Electric Co. and SoCalGas.