Colder-trending outlooks for late October and early November lifted natural gas forward prices across much of the United States for the Oct. 10-16 period, according to NGI’s Forward Look. 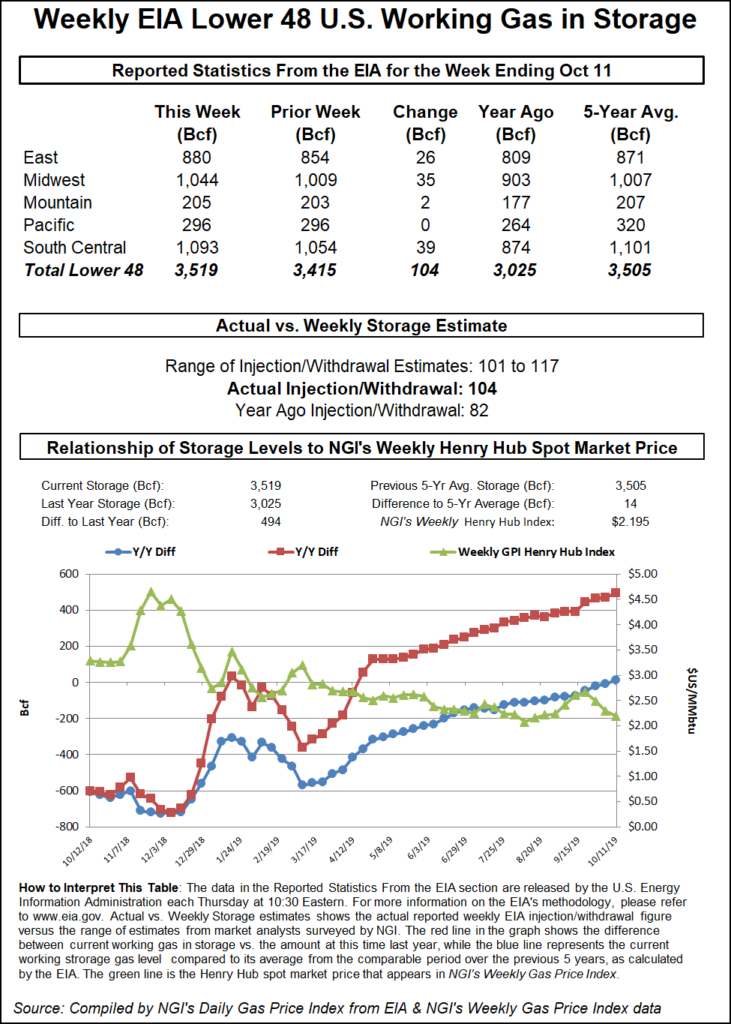 The prompt month rose by an average 12 cents, although gains of as much as 45 cents were seen in the Rockies, where a Pacific “storm train” was set to roll into the region.

Solid increases were seen through the winter strip (November-March), but only small week/week changes were seen for the summer (April-October) and next winter.

The volatility ramped up on Monday, when weather models showed colder temperatures arriving by late October. With forecasts locking onto the chillier pattern, the Nymex November contract jumped 12.5 cents between Monday and Tuesday before a slight pullback on Wednesday.

The midweek price action and the timing of the move lower is evidence that the gas market is still dominated by bearish sentiment, according to Mobius Risk Group. Until approximately noon ET on Wednesday, the nearby contract was positive territory with an intraday peak of $2.384 established after the market open.

“Once the Global Forecast System (GFS) weather model output began to run, and precisely when the 11- to 15-day forecast showed warmer run-to-run changes, the November contract began to retreat,” Houston-based Mobius said. “Keep in mind that even after the run-to-run changes, temperatures are still forecast to be notably colder than normal, and model output remains similar to vendor forecasts.”

Weather data overnight Wednesday moved back in the colder direction, also showing a pattern type that would be likely to stay cold into the 16- to 20-day period, according to Bespoke Weather Services. However, given the run-to-run model volatility the firm is seeing, confidence in the forecast details remains below average.

“Part of the volatility may stem from dual centers of tropical forcing, with one piece coming out into the central Pacific, while the bulk of the projected forcing stays back over the Indian Ocean,” Bespoke chief meteorologist Brian Lovern said. “Models may be struggling trying to ”figure out’ which will ultimately carry the most weight. Our lean remains to the colder side into the first week of November, but then we feel risk is that the pattern turns back milder into the middle third of November.”

With speculative positioning heavily influencing the front of the curve, the uncertainty of how this winter will shape up is keeping longer-dated tenors in the crosshairs of producers who have been forced to sell in order to protect their borrowing base, according to Mobius. Neither factor is necessarily a response to actual supply and demand dynamics, and to the contrary, a contango curve where long-dated pricing is also well below historical realizations typically leads to tighter market conditions.

“If there does end up being too much supply in North America this winter or through next injection season, the fastest way to alleviate the issue is to disincentivize Appalachian growth,” the firm said. “Being the region with the highest initial production rates, and the greatest share of overall North American production, makes this basin vital to the trajectory of supply.”

The rampant growth of production in the last several months has been a boon for Lower 48 storage. After stocks plummeted to more than 700 Bcf below historical levels after a prolonged 2018-2019 winter, inventories are now sitting at a surplus.

On Thursday, the Energy Information Administration (EIA) reported a 104 Bcf injection for the week ending Oct. 11, boosting inventories some 494 Bcf above year-ago levels and 14 Bcf over the five-year average. Bespoke’s Lovern said the triple-digit injection, which was on the lower end of expectations, doesn’t really change the supply/demand picture in its model, even though its 105 Bcf projection was in line with the actual print. “It’s on to the midday weather models now.”

The midday GFS data was little changed through early next week, but lost a little demand Oct. 27-29 by seeing a little break between cold shots, according to NatGasWeather. Although, the dataset still favors another solid cold shot into the United States Oct. 31-Nov. 2.

“Overall, still a solid bullish run from the GFS, but lost the 5-6 heating degree days (HDD) it gained last night, which should be no surprise as it’s been trending colder for days in a row and giving back a few HDDs was warranted,” the firm said.

Weather aside, there are other factors lingering in the background that are significant to the supply growth picture over the next year or two, according to Mobius. Legal challenges facing the Mountain Valley and Atlantic Coast pipelines, two greenfield expansions targeting markets in the Southeast and eastern Gulf Coast, have been essentially stopped dead in their tracks.

“If these two pipes are delayed beyond the mid-2020 to late 2021 timeframe, when they were supposed to be in service, it will be difficult for Appalachia to significantly increase production without facing material seasonal constraints,” Mobius said.

Also playing second fiddle to weather are liquefied natural gas exports, which are expected to grow considerably over the next six to nine months as another five trains or more are expected to enter service.

A realistic capacity factor adjustment means this capacity should equate to at least 3.25 Bcf/d of demand, according to Mobius. “Without considering any other supply/demand component, it would require production to grow at this rate through 2020 for balances to remain as loose as they have been.”

With ongoing import restrictions on Westcoast Transmission, forward prices in the Rockies skyrocketed during the Oct. 10-16 period as a series of storms from the northern Pacific Ocean were set to roll ashore into the Pacific Northwest into next week, serving as a stark reminder that winter is not far away.

None of the storms appear to be powerful enough to bring widespread damaging winds, but they will bring rounds of rain and mountain snow and periodic blustery conditions, according to AccuWeather. Snow levels will vary with each storm, and episodes of rain can be briefly heavy enough to cause isolated urban flooding in the Interstate 5 corridor of Washington and Oregon.

The snow level was expected to dip to Stevens Pass, WA, by Thursday, and by Saturday, could reach slightly lower elevations, including Snoqualmie Pass, WA.

“Each successive storm will add snow and bring episodes of poor visibility, falling temperatures and gusty winds. Through the middle of next week, several feet of snow may pile up over the high country,” AccuWeather senior meteorologist Alex Sosnowski said.

In terms of rainfall, heavy downpours increase the risk of mudslides and other debris flows, according to the forecaster. Through next Wednesday, a foot of rain may fall on the western slopes of the Washington Cascades and Olympic range at lower elevations. However, the soggy forecast may help end concerns for wildfires over much of the Northwest.

Starting last Wednesday, California electric utility Pacific Gas & Electric (PG&E) shut off electricity to hundreds of thousands of customers in 34 California counties as a preemptive measure over wildfire concerns. PG&E had restored electricity to all of those customers by Saturday.

On the East Coast, gusty winds are ushering in some of the coldest air of the season so far, with lower temperatures being funneled into the region behind a ”meteorological bomb’ that brought flooding rainfall, damaging winds and pounding seas at midweek, according to AccuWeather.

It also pushed back the third matchup between the New York Yankees and the Houston Astros, which is now set to take place on Thursday.

While the heaviest rainfall has already fallen from the storm, showers are forecast to linger over northern New England and northern New York state into early Friday, AccuWeather meteorologist Renee Duff said. Strong winds will also drop real-feel temperatures by as much as 15 degrees in the region. Winds are forecast to ease on Friday as an area of high pressure moves in, with sunnier skies making the biting conditions more bearable.

Nevertheless, the glimpse of intimidating cold was enough to spook some Northeast markets. Transco Zone 6 non-NY November prices jumped 31 cents from Oct. 10-16 to reach $2.189, according to Forward Look. December climbed a dime to $3.827, and the full winter strip gained 16 cents to hit $4.10.

Appalachia markets also strengthened. Tennessee Zone 4 Marcellus was up 22 cents at the front of the curve, while December picked up a dime to reach $2.077. The winter strip also climbed 10 cents to hit $2.05, while only modest gains were seen further out the curve.

Meanwhile, much like the rapid refill rate of U.S. storage facilities over the past summer, a similar pace has elevated inventories at Dawn Storage in eastern Ontario. In fact, in September, storage operator Enbridge Inc. said the high demand for injections had limited its ability to fulfill requests for interruptible storage injections as well as increases to injection services.

Forward markets have responded to the growth in supplies, with Dawn Hub moving to a rare discount to Chicago Citygate.

Dawn November prices sat on even keel with Chicago Citygate November prices as of Wednesday, with both priced at around $2.18, Forward Look data show. However, Dawn’s winter strip, priced at $2.64, came in some 4 cents below Chicago. Dawn’s summer 2020 package moved back to a 3-cent premium over Chicago, but the winter 2020-21 strip fell back to a 5-cent discount.