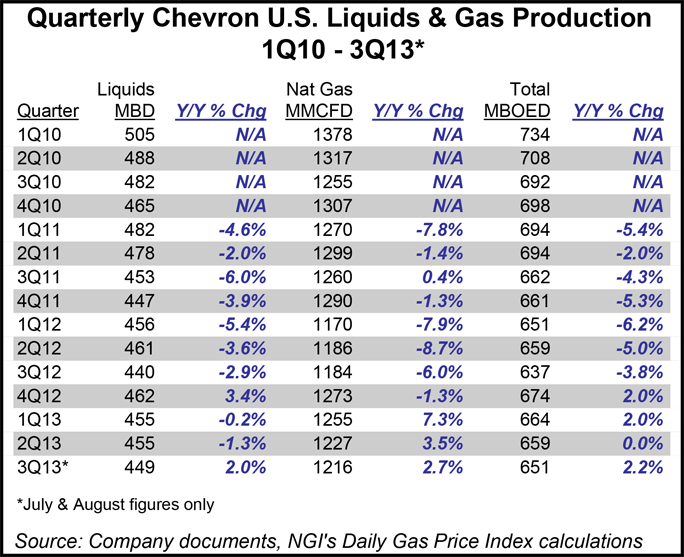 The San Ramon, CA-based major reported preliminary results that cover July and and August; full results are to be issued on Nov. 1.

Worldwide, upstream results are forecast to be slightly higher and downstream profits “significantly lower” from 2Q2013. Between April and June the oil major earned $5.4 billion ($2.77/share), which was down from $7.2 billion ($3.66) in the year-ago quarter (see Daily GPI, Aug. 5). Chevron earned $1.08 billion during 2Q2013 in the United States, down $235 million year/year, on higher operating and depreciation expenses, as well as lower crude oil production.

U.S. net oil equivalent production is coming in “slightly lower” than in the previous period, primarily because of planned turnaround activity across several properties in the Gulf of Mexico. International output should be “modestly higher” because there was less maintenance.

In a note Thursday, analysts with Tudor, Pickering, Holt & Co. (TPH) said the global interim report was negative enough to trim the 3Q2013 earnings/share estimate by 16%, or 49 cents/share. The worldwide upstream decrease was “driven by lower than expected production,” down 2% from analysts’ forecasts. Chevron also had about $150 million in dry hole expenses, again higher than TPH had predicted.

TPH analysts also took a look at Chevron/Apache Corp.’s proposed liquefied natural gas export project, KM LNG, to be sited near Kitimat, British Columbia. Chevron’s upstream chief, George Kirkland, had said in August the preliminary work was done; a final investment decision (FID) has been moved to 2014. KM, one of the first export projects out of the gate in British Columbia, would transport up to 1.4 Bcf/d to overseas markets (see Daily GPI, Sept. 14, 2012).

“Base case, we estimate the fully integrated project’s worth at $1.1 billion (net to Chevron),” said analysts, with an internal rate of return of 12% and free cash flow by 2023 and beyond of $1.2-1.4 billion/year net. The FID “may come late 2014, and we’d expect updated guidance on timing and cost,” said analysts. “Our current LNG facility (ex-upstream/pipeline) cost estimate of $13.7 billion gross is three times upstream/LNG returns.”