Chevron Corp. has filed a complaint with FERC seeking to force Kinder Morgan Louisiana Pipeline LLC (KMLP) to shift Chevron’s primary receipt and delivery points on the pipeline so it can send supplies for export to liquefaction facilities now under construction at Sabine Pass. 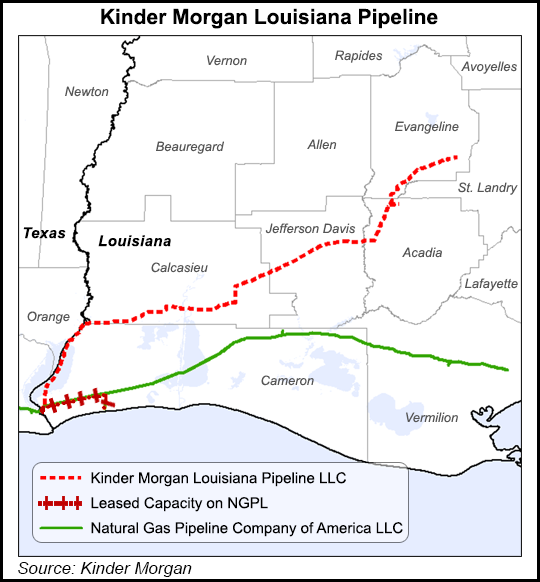 In the filing to the Federal Energy Regulatory Commission (FERC), Chevron alleges that despite numerous requests, KMLP has refused to honor provisions of Chevron’s $33.6 million annual contract for half of the firm transportation access on the pipeline that had been designed to carry gas from the existing import terminal. Currently, KMLP is pursuing plans to reverse flow and sell parts of its share of the pipeline’s capacity to capture the export market. Chevron.wants to preserve its capacity contract but shift along with the flow reversal to sending gas for export through the pipe.

Chevron asked FERC for fast-track processing of its complaint, which includes a request for confidential treatment for portions of the filing in keeping with the confidential nature of its facility option agreement with KMLP. Chevron alleges that KMLP has violated parts of that agreement by declining to make permanent changes to firm receipt and delivery points.

A KMLP spokesperson was contacted for the pipeline operator’s reaction, but no immediate response was provided.

By exercising its rights to change points on the pipeline, Chevron told FERC it “will be able to mitigate costs it incurs in holding the capacity” for volumes of imports that have dried up at Sabine Pass’ original liquefied natural gas (LNG) receipt and regasification terminal.

FERC is being asked to order KMLP to make the permanent changes requested by Chevron, which argued that originally its unit and Total Gas & Power North America Inc. selected KMLP to build an interstate gas pipeline that would deliver large volumes of imported LNG supplies from Sabine Pass, only to see the U.S. shale boom eliminate the need for the imports.

“Since KMLP has refused to implement the request, undermining Chevron’s ability to mitigate the costs it incurs for the capacity it holds on KMLP, [FERC] should process this matter under its fast track processing procedure,” the complaint filing concluded.

Chevron contends that in refusing to make the changes, KMLP has not provided “any operational reasons as to why the request cannot be performed. KMLP has not argued or suggested that capacity is unavailable.” Chevron noted that it is not requesting to increase its 50% capacity holding, but merely use what it already has under long-term contract.

In refusing to grant the request, KMLP is contending the request applies to another portion of its contract with Chevron, the “mutual agreement on rates” section. Chevron disagrees, citing tariff, firm capacity rights and the negotiated rate agreement parts of its contract.