California has ordered a Chevron Corp. subsidiary to pay a civil penalty of more than $2.7 million for violations that state regulators claim caused more than 20,000 barrels of oil and water to leak from an abandoned well in the San Joaquin Valley. 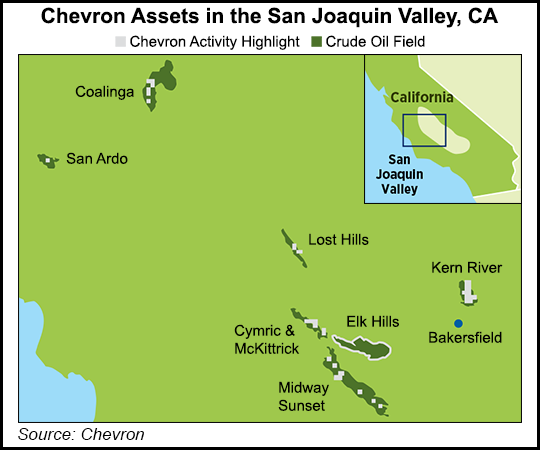 In an order issued Wednesday, the California Department of Conservation’s Division of Oil, Gas and Geothermal Resources (DOGGR) said Chevron U.S.A. Inc. allowed a series of surface expressions, or oil and water leaks, to occur on at least four occasions since May when the incident was first reported.

The leaks happened in the Cymric oilfield in Kern County, about 35 miles west of Bakersfield. Cymric is one of the state’s largest producing fields, where there are more than 3,000 active wells. Chevron operates more than 300 active cyclic steam injection wells there.

Since May, DOGGR has issued notices of violation and a formal order requiring the company to take all measures to staunch the flow of oil. The agency said while the company’s initial responses contained the surface expressions, it failed to prevent new leaks.

Chevron spokesperson Veronica Flores-Paniagua said the company has received the civil penalty order and is reviewing it.

Chevron indicated that steam injection operations, which occurred at the same time work was being done to reseal the nearby idled wells, likely caused the leaks, DOGGR said. The oil and water spilled into a dry creek bed. Flores-Paniagua said cleanup of the impacted area is nearly complete.

“It remains our goal to prevent seeps consistent with DOGGR’s updated regulations, and we continue to work closely with regulators to address any seeps that occur,” she said of underground injection control rules that took effect earlier this year.