Chesapeake Energy Corp. is looking to dust off the past and ready for the future, as it integrates a bevy of Lower 48 natural gas-rich assets acquired last year in its quest to accelerate production. 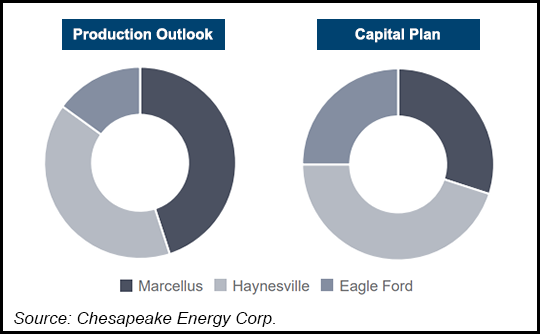 CEO Nick Dell’Osso and his management team shared a microphone on Thursday to discuss year-end results. However, executives are keeping their eye on prospects for their natural gas-weighted portfolio.

In the beginning of the conference call, Dell’Osso took a minute to comment on Russia’s invasion of Ukraine.

“The events unfolding in Eastern Europe…highlight the crucial role our industry can play in the energy security of the globe,” he told analysts. “Being in a position to do so with as low a carbon footprint as we can is more important than ever.

“Our results and transactions pursued in 2021 are great evidence of the early success of this strategy, and set us up to continue to deliver sustainable results in future periods.”

Oklahoma City-based Chesapeake last November had indicated it would direct 85% of its capital spending in 2022 to the “highest return opportunities” in the Eagle Ford, Haynesville and Marcellus shales.

“These transactions position us to focus on operational excellence in 2022, a hallmark strength of Chesapeake,” the CEO said. However, “in the year ahead, we will maintain our disciplined approach to capital allocation across our three high return assets…The transactions must make us better, not just bigger.”

CFO Mohit Singh, who recently joined the company, told investors that Chesapeake is stepping up its game in the liquefied natural gas (LNG) export trade too.

“We’re pretty excited about the ability to take some of our molecules and get them on the water,” Singh said. “We are in active dialogue with different counterparties. Nothing is quite to a stage where we are ready to make an announcement,” but a dialogue is ongoing “with several different companies and counterparties that potentially can get our gas on the water such that we can get pricing, which is linked to international LNG pricing. So, more to come on that.”

In the Haynesville, Chesapeake faced some basis widening during December, which Singh said was experienced by its exploration and production peers.

“We weren’t unique in that sense,” he said. Repair and maintenance work was ongoing on the Columbia Gulf Transmission Pipeline, aka CGT, system, which caused some “backup” at well sites. “But as that pipeline came back on, that debottlenecking and the volumes were able to move in. What we have seen since then is that the basis has normalized…We actively monitor it, and as we see opportunities to lock in some basis hedges, we are opportunistically doing that.”

There also have been some concerns in the market about Appalachian basis blowouts, in part because of the delay in completing the Mountain Valley Pipeline. Appalachian gas takeaway is also actively monitored, Singh said.

“It is, overall as we all know, a constrained market,” he said of the Marcellus. “What gives us the most hope…is that the quality of the asset is so good that even at the kind of prices and the netbacks that we have, we are realizing some very, very attractive economics. The plan is to just run the asset.

“Obviously, we won’t be growing it too much because it’s constrained,” Singh said. “But…we can try to get some physical and financial hedges in place to protect ourselves.”

Dell’Osso noted that the Marcellus is “the highest return asset in our portfolio. What you’ve seen us do over the last couple of years is as there’s been market capacity, we’ve been willing to fill it. Should that continue to play out, we would look to do the same thing…

“We generally believe that the market should be filled by Marcellus volumes before any others,” said the CEO. “If you think about the supply stack, and we own a lot of it, if there’s an opportunity to do so we’ll continue to do that..If there became an opportunity in the future to grow volumes in that basin, we would be eager to do so.”

How Much Natural Gas Is Chesapeake Producing?

The liquids-rich production from the Eagle Ford in the final three months averaged 92,000 boe/d.

Chesapeake today is operating 11 rigs, with two in the Marcellus, six in the Haynesville and three in the Eagle Ford Shale. By the end of March, the plan is to drill up to 50 wells and place up to 50 to sales.

On the environmental, social and governance (ESG) front, Chesapeake’s Haynesville gas is now 100% certified, with the Marcellus gas supply expected to achieve 100% differentiation by the end of this year.

Chesapeake has set a goal by year’s end to ultimately market as certified more than 3 Bcf/d net from the Haynesville and Marcellus combined.

In December, Chesapeake became the first company to certify all of its Haynesville gas operations jointly under the MiQ methane standard and the EO100 Standard for Responsible Energy Development. More than 840 continuous methane emissions monitoring devices have been placed in Louisiana legacy assets and in the Vine acreage, which was certified by Project Canary’s Trustwell process.

In Pennsylvania, Chesapeake installed 950 methane monitoring devices on its legacy acreage and expects in April to begin installing 330 devices on the acquired Chief acreage. Certification of the legacy Pennsylvania assets is expected to be completed by mid-year, with the Chief assets certified by year’s end.

More than $30 million is earmarked for ESG initiatives, with plans to retrofit more than 19,000 pneumatic devices by the end of this year. In addition, the company’s goal is to reduce reported greenhouse gas emissions by 40%, with methane emissions cut by 80%. Chesapeake also launched an ESG microsite in December dedicated to ESG reporting and progress toward its climate-related targets.