Chesapeake Energy Corp. has agreed to take close to 6,000 acres in Harrison County, OH, and a combination of cash and contingent cash payments of up to $25 million to settle part of a lawsuit filed against companies founded by former CEO Aubrey McClendon. 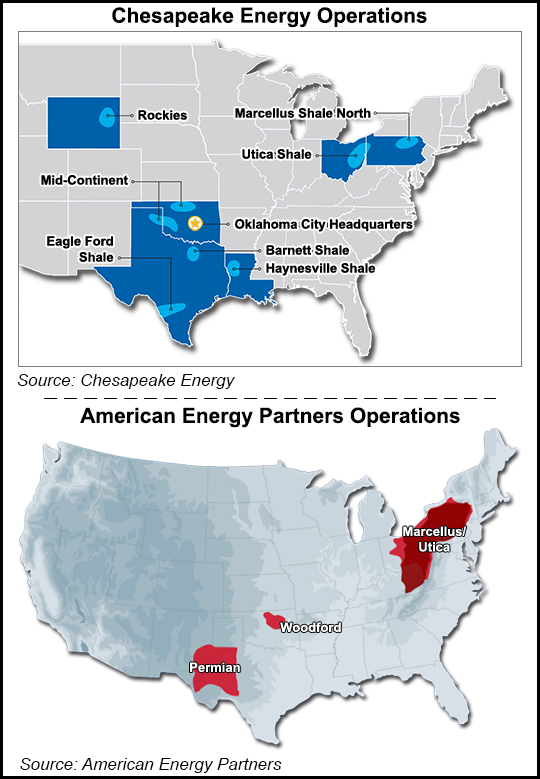 Chesapeake in February filed a lawsuit alleging McClendon had stolen trade secrets during his final months at the helm to benefit American Energy Partners LP (AELP) and affiliates, which he and his partners founded in 2013 (see Daily GPI, Feb. 17). McClendon was alleged to have “misappropriated highly sensitive trade secrets,” discovered through a forensic analysis of his former Chesapeake email account.

Chesapeake informed AELP and partner The Energy & Minerals Group that litigation is ongoing against them and other parties and would be “prosecuted accordingly,” AELP said.

However, litigation has been settled against affiliate American Energy-Utica LLC (AEU) and its investors, which include EMG, according to AELP. McClendon said in February that the lawsuit was baseless.

However, under the settlement, “In exchange for the assignment of approximately 6,000 acres in northern Harrison County, OH and a combination of cash and contingent cash payments not to exceed $25 million, AEU and the John Doe investors 1-20 have been dismissed from the lawsuit with prejudice to the refiling of same, and are no longer parties.”

McClendon said Tuesday he did not approve of the settlement. He stepped down from managing AEU last December when he agreed to the appointment of Jeff Fisher, a former Chesapeake executive, as chairman; Fisher had been COO (see Shale Daily, June 2, 2014). Fisher also succeeded McClendon as CEO of AEU at that time.

“Although Mr. McClendon is a director and the single largest non-institutional shareholder in AEU, he did not approve the settlement, and neither he nor AELP were advised of the negotiated terms of this settlement,” McClendon and AELP said Tuesday. “AELP and Mr. McClendon will continue their efforts to have the dispute arbitrated as required by Mr. McClendon’s agreements with Chesapeake.

“As he will show in the appropriate forum, Mr. McClendon rightfully possesses an extensive array of information about more than 16,000 wells, and the related leasehold acreage and future wells, he jointly owns with Chesapeake, including land, well, title, accounting, geological, engineering, reservoir, operating, marketing and performance information.”

McClendon’s “well documented agreements with Chesapeake gave him the right to own and use this information for his own purposes, including sharing it with his employees, contractors, advisers, consultants and affiliated entities.”

AEU management “apparently chose to settle with Chesapeake before any discovery was taken, evidently for the business purpose of mitigating further damage that Chesapeake’s litigation has been having on AEU’s business and financing activities,” McClendon and AELP said. “AEU has the right to resolve the case in this fashion, but this resolution should not be mistaken as reflecting an informed view of the merits of Chesapeake’s claims or a concession of any liability by any party to Chesapeake.”