Chesapeake Energy Corp. CEO Doug Lawler said the independent isn’t currently looking to sell any of its core acreage, but it could conceivably part with one of its “six big powerful assets” where it holds a significant land position. 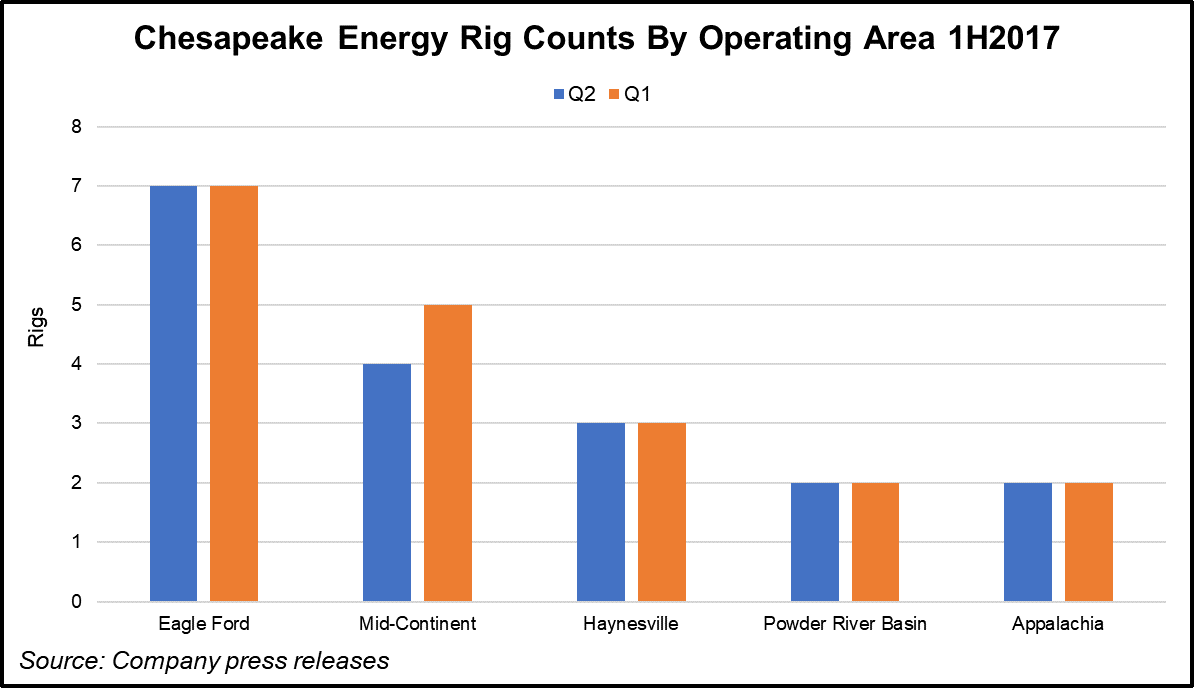 Lawler told an audience at the Barclays CEO Energy-Power Conference in New York on Tuesday that the Oklahoma City-based producer remains focused on being cash flow neutral in 2018. That plan includes $2-3 billion in asset sales, although no timetable is set.

“Obviously, we will do that as quickly as possible,” Lawler said. “We want to maintain with our capital program our position for growth, so that we don’t starve the supply chain or the synergies, the capital efficiencies that we’ve gained in our program, and we’ll be able to maintain that program and be in position to grow when the time comes.

“We will not grow just for growth’s sake. And the capital allocation that we have is still as intense today across our asset portfolio as it has ever been as we continue to see the improvements across the portfolio in each of the assets.”

Slides from Tuesday’s presentation show the company has earned about $2.8 billion in net proceeds from asset sales since 2016.

But during follow-up questions, Lawler conceded that Chesapeake could ultimately part with its assets in one of six areas. Chesapeake mostly works today in the Midcontinent, Eagle Ford and Haynesville shales, as well as the Powder River and Appalachian basins.

“We definitely have core areas that we’re not looking at selling or won’t consider selling at this point in time,” Lawler said. “We do believe that we have other smaller assets that will contribute to that goal over the next few years.

“But we also are looking at other larger asset sales. We have not identified what those asset sales might be. Obviously, with the low commodity prices, the valuations are low. We’re not in a position where we’re desperate [and] we’re not in a position where have to sell anything. But our goal of improving the balance sheet further and strengthening that balance sheet requires that we look at potentially selling a bigger asset.”

Nevertheless, Lawler said the company would continue its efforts to build onto its core positions in the aforementioned areas.

“We are engaged in [adding to our positions], and we have done quite a bit of that in several of our assets,” Lawler said. “And I think you’ll continue to see that…What’s great about the position Chesapeake has today is that we still have significant upside potential and resource potential in each of the assets.

“Because of the size of those assets, we’ve got a differential opportunity [and] acreage position [that] a lot of our competitors don’t have. When you look at the large contiguous position we have in the Marcellus, being able to drill 10,000-foot wells out there…not a lot of companies that can do that.”

Lawler also updated the audienceon the company’s operations in South Texas in the wake of Hurricane Harvey, acknowledging that Chesapeake was impacted “to a pretty significant extent” in terms of its Eagle Ford Shale operations.

“We have not yet quantified a number to which it would impact our production,” Lawler said, noting that Chesapeake still had about 20% of its production offline in the field. “We’ve also recognized additional issues around all aspects of our activity in operations, whether it’d be downtime on drilling and completion crews or whether it’d be in the supply chain drill pipe, downstream issues, infrastructure issues.”

Lawler said while the company’s operations in the area have not sustained significant damage, “we are definitely being impacted and we expect to continue to be impacted across the next few weeks until we return to normal with our operations and get everything lined back up from not only our wells producing, but also through the entire midstream and downstream chain.”

He envisions the Eagle Ford will continue to be Chesapeake’s principal oil growth engine for the next several years, with longer laterals and enhanced completions driving the value.

Although the Marcellus is considered a core asset, Chesapeake has considered selling it in the past.

Shortly after Lawler took the helm in 2013, Chesapeake announced in June 2014 that it was open to selling some of its drier assets in the Appalachian Basin for the right price. That December, the company closed on a $4.975 billion sale of 413,000 net acres of natural gas assets in northern West Virginia and southern Pennsylvania to Southwestern Energy Co. The sale included hundreds of wells targeting the Marcellus and Utica shales.

Chesapeake began to draw down its capital spending in the Marcellus in 2015. The drawdown continued into 2016in the wake of low commodity prices.

During a conference call in May 2016, Executive Vice President Frank Patterson conceded that the company might consider selling non-core acreage in the Marcellus. But by September — coincidentally, at last year’s Barclays CEO Energy-Power Conference — Chesapeake had shifted its attention to achieving cash flow neutrality in 2018.

Last August, Chesapeake CFO Nick Dell’Osso said several of its assets were up for sale, particularly in the Midcontinent.