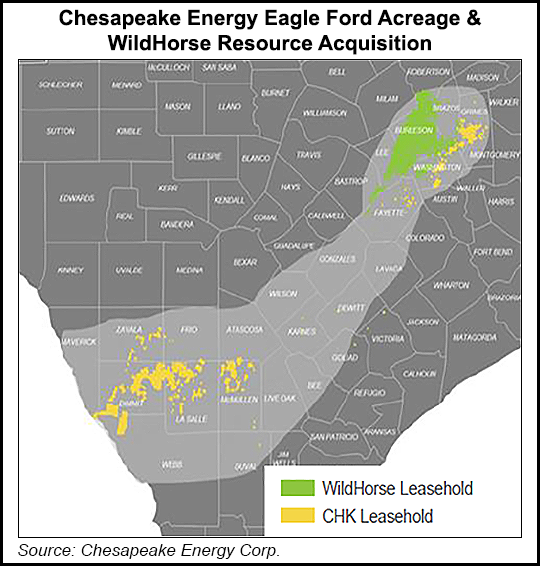 As the broader market continued recovering from the losses of recent weeks, Chesapeake shares on Tuesday fell more than 13%. Analysts noted that while the deal could improve cash flow with higher liquids production, it hinges largely on the continued strength of oil prices.

CEO Doug Lawler said during a call to discuss the transaction and the company’s third quarter earnings results that there’s a “compelling investment thesis” in the acquisition that’s “anchored in the significant depth of oil growth opportunities in the portfolio.”

Chesapeake has been shifting to an oilier production mix in recent years to strengthen its balance sheet. Under Lawler, the company has also been assiduously focused on cutting billions of dollars in debt.

“This transaction accelerates Chesapeake’s strategic plan and expands the value-creation opportunities for our shareholders by adding a premier asset at an attractive valuation, significantly boosting oil production” margins and cash flow growth, “while improving our leverage metrics,” Lawler said.

Chesapeake’s heaviest focus has been on the Eagle Ford of South Texas, which it views as a growth engine for the current strategy, and where it’s been the most active this year with plans to bring online nearly 150 wells. While the WildHorse assets are located hundreds of miles to the northeast of the core Eagle Ford assets, Chesapeake’s management views them as a third oil growth engine that would also complement its properties in the resurgent Powder River Basin (PRB).

Chesapeake also plugged the $200-280 million of projected annual savings it could achieve with the deal through operational and capital efficiencies.

“We believe there are numerous opportunities to build upon WildHorse’s impressive performance and further enhance the return profile of the asset,” Lawler said. “Chesapeake is a leading operator in the Eagle Ford. Our capital efficiency in the basin is demonstrated by our ability to consistently drill and complete the longest laterals at the lowest cost per foot. Our proven operational track record and geotechnical expertise provide great confidence that we will deliver material savings across all aspects of the operation.”

WildHorse was founded in 2013 and began trading publicly less than two years ago. It has amassed one of the largest positions in the Upper Eagle Ford. The company produced 46,700 boe/d in 2Q2018, with an 84% liquids cut.

When asked about WildHorse wells and their notable decline profile on the call, Executive Vice President Frank Patterson, who oversees exploration and production, said spacing issues on the acreage must be addressed. He said Chesapeake has already run models to show that the problems can be resolved.

Lawler added that the WildHorse position is “just begging for the Chesapeake weapons to be deployed on it.”

“As we take everything learned from our Eagle Ford in South Texas, as well as the other basins, we’ll hit the ground running,” Patterson said. “We will focus on moving toward longer laterals, reducing drilling and completion costs, and optimizing spacing to drive for the greatest value out of this contiguous acreage position. We also see potential in the Austin Chalk on the acreage footprint and look forward to additional appraisal opportunities. This gives us a third oil engine in our portfolio and a second one with direct access to premium markets in the Gulf Coast.”

Chesapeake plans to finance the cash portion of the acquisition, expected to be $275-400 million, with its revolving credit facility. The transaction must be approved by shareholders of both companies and could close in the first half of next year.

At the election of each WildHorse common shareholder, the consideration would consist of 5.989 shares of Chesapeake common stock, or a combination of 5.336 shares and $3.00 cash, in exchange for each WildHorse share. The value of the deal also includes $930 million of WildHorse debt.

WildHorse may designate two people, expected to be CEO Jay Graham and current director David Hayes, to Chesapeake’s board.

“We are extremely proud of the company we built,” Graham said. “This combination creates an impressive oil growth platform which provides both immediate value and potential for significant long-term upside to our shareholders. As a highly regarded operator, Chesapeake brings the technical expertise and operational efficiencies needed to maximize the value of this premier asset.”

Chesapeake said it ran four rigs in South Texas during the third quarter and plans to add a fifth next year to continue delineating the Upper Eagle Ford and Austin Chalk.

The company also moved to five rigs in the PRB early in the third quarter. It remains focused on the Turner formation, a tight sands oil play, where it turned another 13 wells to sales during the third quarter. Daily Turner production increased 107% from 3Q2017 and management is still considering adding a sixth rig in the basin next year, which would likely start to focus on the Parkman and Niobrara formations.

Net income was $60 million (7 cents/share) in the third quarter, compared with a year-ago net loss of $41 million (minus 5 cents).