A pipeline proposed by PennEast Pipeline Co. LLC to connect Marcellus Shale natural gas with markets in eastern Pennsylvania and New Jersey would have saved consumers more than $890 million during the winter of 2013-2014 in natural gas and electricity costs, according to an analysis commissioned by PennEast. 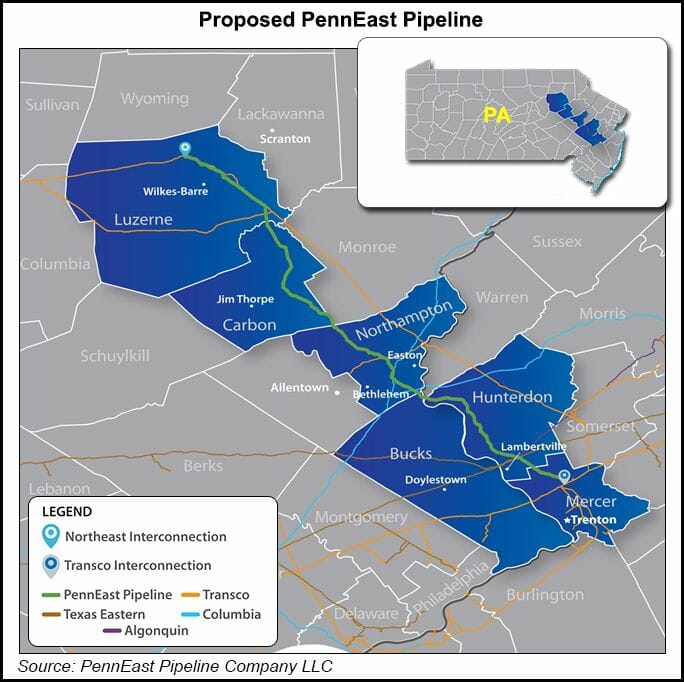 The study, “Estimated Energy Market Savings From Additional Pipeline Infrastructure Serving Eastern Pennsylvania and New Jersey,” examined what natural gas prices in the region that would be served by PennEast could have been in the winter of 2013-2014 if an additional 1 Bcf/d of pipeline capacity had been available.

Concentric Energy Advisors Inc. evaluated the relationship between gas prices that actually occurred in eastern Pennsylvania and New Jersey relative to gas demand experienced in the region each day, and the impact that additional pipeline capacity could have had by lowering natural gas prices from what otherwise occurred.

“The original pipeline network was not designed to transport the significant quantities of gas now being produced in the Marcellus and Utica shale region, creating a need for additional pipelines, pipeline reversals, and pipeline expansions,” Concentric said in its report. “A number of new natural gas pipeline projects, including PennEast, have been proposed to transport the prolific natural gas production in the Pennsylvania area to serve demand.”

Many of the Marcellus/Utica-focused pipeline projects have incurred substantial resistance from area residents and municipal officials (see Daily GPI,Jan. 23), including PennEast (see Shale Daily, Nov. 26, 2014). Numerous comments have been filed on projects at the Federal Energy Regulatory Commission, some of them asking whether additional pipeline capacity actually is needed.

The biggest savings would have come from lower electricity prices due to the savings achievable by gas-fired power generation, where Concentric estimated electric savings in excess of $400 million due to lower market area natural gas prices.

“Additional natural gas pipeline capacity, such as proposed by PennEast, has the potential to provide significant value to energy consumers in eastern Pennsylvania and New Jersey by lowering natural gas prices during high price periods,” the report said.

The analysis focused on the winter of 2013-2014 since that period most accurately reflects current market dynamics, including the inclusion of Spectra Energy’s New Jersey-New York Expansion project and Transco’s Northeast Supply Link, both completed in late 2013. The study also found that absent additional infrastructure, and with growing natural gas demand, the high natural gas prices experienced in the winter of 2013-2014, as well as those this winter, will continue.