Kevin McIntyre, an attorney with Jones Day who has served as co-head of the law firm’s global energy practice, was sworn in as FERC chairman Thursday morning, bringing the regulatory panel to its full strength of five members. 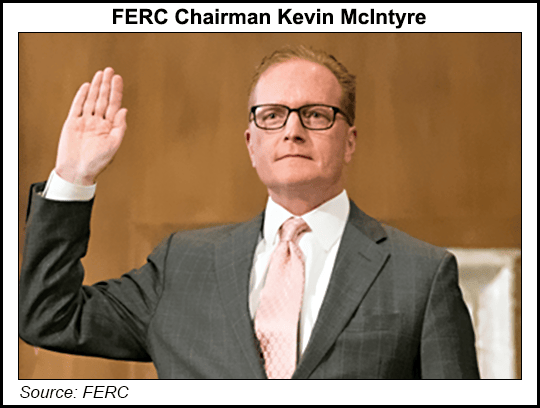 McIntyre, a Republican, has practiced law at Jones Day for most of his nearly 30-year legal career. He is a graduate of San Diego State University and Georgetown Law.

The Senate confirmed the nominations of McIntyre and Richard Glick Nov. 2. Glick, a Democrat, was sworn in Nov. 29 to serve the remainder of a five-year term expiring June 30, 2022.

The swearing in brings to a close the brief tenure of Neil Chatterjee as acting chairman, a post he had held since August. During that time, Chatterjee oversaw the clearing of a backlog of cases that had built up at the Federal Energy Regulatory Commission beginning in early February, when then-Chairman Norman Bay resigned, leaving the Commission without a quorum and, therefore, unable to vote on major issues.

Chatterjee was also at the helm when the Department of Energy (DOE) filed its controversial notice of proposed rulemaking (NOPR). FERC is expected to take action on the NOPR next week. Chatterjee will remain at FERC as a Commissioner.

The NOPR as originally proposed would allow “for the recovery of costs of fuel-secure generation units that make our grid reliable and resilient,” according to DOE Secretary Rick Perry, and would reward units that have a 90-day supply of fuel on site.

McIntyre’s attitude toward the proposal hasn’t been made clear, though he said in testimony during his confirmation process that “FERC is not an entity whose role includes choosing fuels for the generation of electricity. FERC’s role, rather, is to ensure that the markets for the electricity generated by those facilities proceed in accordance with law.”

“I look forward to Chairman McIntyre’s leadership and to continuing to work with all of the Commissioners,” said Sen. Lisa Murkowski (R-AK), chairman of the Senate Energy and Natural Resources Committee. “My hope is that, after due consideration of the record, FERC will concentrate its full capacity on deciding promptly the many important proceedings on its docket.”

The last time FERC had a full complement of five members was October 2015.