Chaparral Energy Inc. said it’s finished drilling a spacing test in Oklahoma’s Sooner Trend of the Anadarko Basin mostly in Canadian and Kingfisher counties (STACK) during the first quarter and has several additional tests planned for 2019. 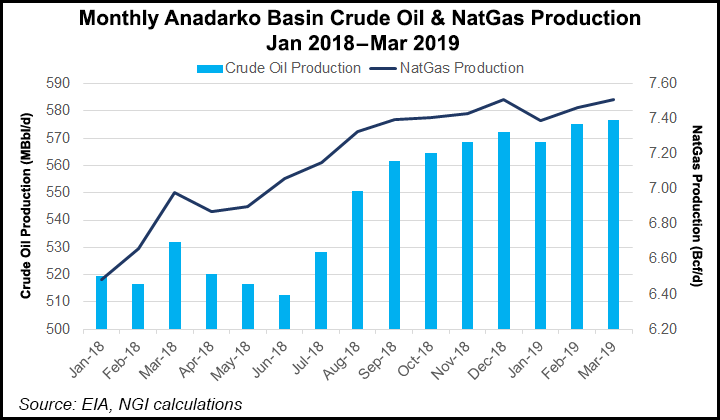 The Oklahoma City-based independent, which also reported a year/year surge in STACK production, said it plans to operate three rigs for the remainder of the year after dropping one rig in early April.

Chaparral, which is developing targets in the Woodford Shale and the Meramec formation simultaneously, finalized drilling of its 11-well cube style Foraker spacing test in Canadian County and has begun completion of the wells. The test was drilled from three pads. The company said three wells on the first pad had an average 30-day initial production rate of 1,292 boe/d (42% oil), which significantly exceeded the type curve. Two of the wells targeted the Meramec while one was drilled into the Woodford.

“While we still need more time to assess the detailed results and learnings from this one-mile full section development, the clear enhanced productivity we are seeing provides the insight into the upside potential of cube style co-development within our Merge acreage,” CEO Earl Reynolds said.

The company said it will “closely monitor” production from Foraker and other spacing tests as it works a strategy to develop its Merge prospect within the STACK. Chaparral acknowledged its production growth trajectory in the basin would be impacted by the spacing tests during the first half of 2019, but projects growth will be more in-line with previous quarter/quarter increases in the second half of the year.