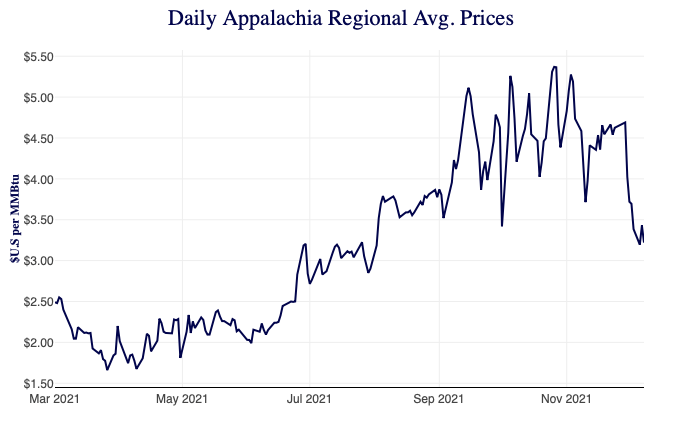 “The partnership between Tug Hill and XcL means, for the first time, gas purchasers will have the opportunity to buy RSG that has been TrustWell certified from the wellhead to the receipt point,” said CEO Michael Radler, who oversees both companies.

Tug Hill produces more than 800 MMcf/d of gas and delivers it to market via XcL’s gathering system. Tug Hill and Xcl, both sponsored by private equity giant Quantum Energy Partners, would be the first upstream and midstream companies to jointly seek independent certification of 100% of their operating assets.

The management teams “believe the integration of independent, high fidelity upstream and midstream certifications will result in a unique and unmatched RSG offering for the market.”

Earlier this year, Tug Hill joined Our Nation’s Energy Future, aka ONE Future, a coalition that has pledged to reduce collective methane emissions to 1% or lower.

“Tug Hill places an extremely high focus on operational excellence, sustainability and being a good neighbor within the communities where we operate,” said COO Sean Willis. “Tug Hill is committed to utilizing high fidelity technology and rigorous operating standards to reduce the methane intensity of our operations and produce energy responsibly.”

XcL COO Justin Trettel noted that the gathering assets and interconnect points are “in the overlapping core” of the Marcellus and Utica/Point Pleasant shales. The independent certification “helps ensure midstream assets minimize unwanted methane emissions and maintain top tier operating practices, which will provide additional value for our customers.”

In addition to independent review and ESG certification, Tug Hill plans to install Canary X continuous emissions monitors on locations that represent about 80% of its production in the region. The monitors measure and record methane emissions. XcL also would install the emissions monitors at each of its major locations, including the Clearfork Processing facility and several central dehydration and compressor stations.

“This partnership between Tug Hill and XcL is a significant moment in the growth of responsibly sourced natural gas markets,” said Project Canary CEO Chris Romer. “These leading upstream and midstream operators are partnering to demonstrate their commitment to high standards and low emissions across the energy supply chain.

“Tug Hill and XcL understand the importance of completing the RSG circle, so gas buyers can have total confidence that the product purchased is produced and transported in the most advanced and environmentally responsible manner.”

A bevy of top gas-focused E&Ps working in the Lower 48 are clamoring to certify supplies, including No. 1 producer EQT Corp., Chesapeake Energy Corp. and PureWest Energy LLC.

Is This An Inflection Point For RSG?

Pittsburgh-based Olympus Energy LLC, which has around 100,000 net acres in southwestern Pennsylvania, recently said it is aiming to become the “first integrated E&P” to work toward RSG certification of its entire operated production portfolio. Continuous monitoring units are to be installed on each of the private E&P’s producing well pads and all pipeline facilities operated by subsidiary Hyperion Midstream LLC.

“ESG is foundational to everything that we do at Olympus, from site preparation to community giving, so it makes perfect sense to ensure each aspect of our operations are living up to those standards of excellence,” CEO Tim Dugan said. “Olympus is a purpose-built company with expanding upstream and midstream operations in Allegheny and Westmoreland counties. We view this industry-leading partnership as an example of our mission to grow responsibly and seek new and improved solutions for our operations and stakeholders.”

The move to certify the Olympus upstream and midstream assets, sponsored in part by Blackstone Group Inc., is starting in early 2022 and should be completed by the end of next year.

The Olympus plan signifies “an important inflection point in the evolution of the certified gas market, as producing and midstream assets are both critical links in the natural gas value chain,” Romer said. “Tackling inadvertent and unwanted methane leaks from infrastructure is just as important as at the wellhead.”

BKV Corp., a privately held Denver-based E&P and a ONE Future member, also is working with Project Canary to produce certified RSG from its assets in northeastern Pennsylvania. Eventually, it could pursue certification for Barnett Shale gas in North Texas, where it is one of the largest gas-focused E&Ps.

“Part of our mission at BKV is to create long-term sustainable value in the energy industry,” CEO Chris Kalnin said. “Partnering with Project Canary for operational certification and continuous emissions monitoring is one of the many investments we are making to achieve that goal. We foresee certified RSG driving demand for low-carbon energy. We are looking forward to being an early mover in this space and expanding our sustainability efforts across our Marcellus and Barnett asset areas.”

BKV’s decision to “certify and continuously monitor emissions gets us one step closer to a regenerative energy future,” Romer said. “Every molecule counts.” BKV initially plans to use the emissions monitoring and certification process across its Marcellus Shale operations.

“Appalachia is one of the lowest emission intensity basins, and we believe Project Canary’s third-party verification will help us maintain operational excellence and integrate environmental consciousness at every step of the production process,” said BKV’s Lauren Read, vice president of Northeastern Pennsylvania Operations. “BKV is excited to apply this technology, share our results with our stakeholders and bolster our reputation as a transparent and responsible operator in Northeastern Pennsylvania.”