A plan unveiled last month in Mexico that focuses on the need to develop the economies of Guatemala, Honduras and El Salvador sees natural gas as a key driver of development. 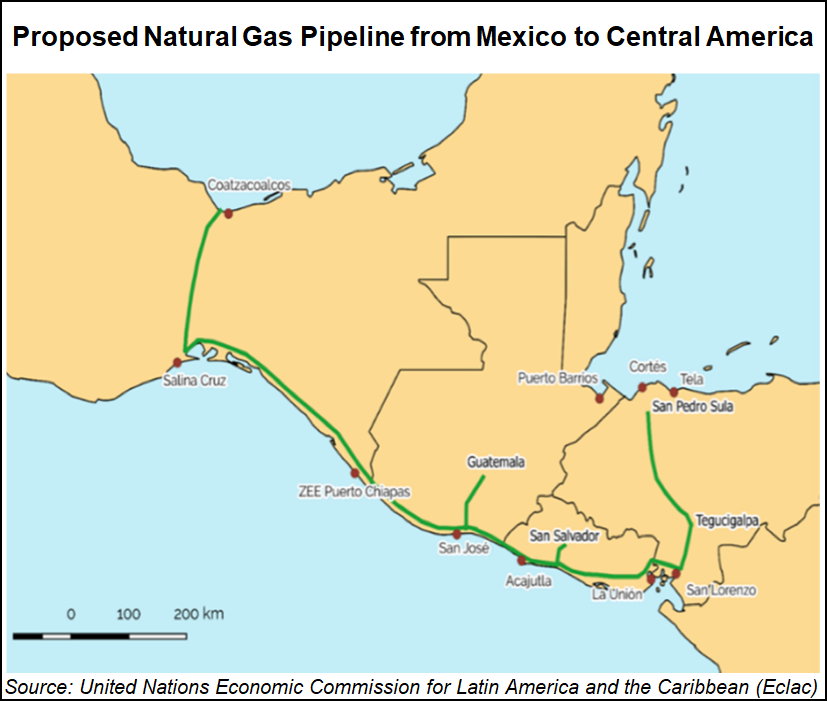 A humanitarian crisis is building up in Guatemala, Honduras and El Salvador, collectively known as the Northern Triangle of Central America, fueled by poverty and criminal violence, according to the government of Mexico and the United Nations Economic Commission on Latin America and the Caribbean (Eclac), which authored the plan. Energy can be part of the solution, they argued.

The central part of the plan is a 600-kilometer (370-mile) gas pipeline that would run south from Coatzacoalcos, also known as Pajaritos, on Mexico’s Gulf Coast, to Salina Cruz on the Pacific Coast, then south to Guatemala. From there it would head further south through El Salvador before moving north to the Honduran industrial capital, San Pedro Sula, and the port of Cortés on the Atlantic Coast.

A $1.2 billion liquefied natural gas (LNG) liquefaction plant and an associated combined-cycle 300 MW power plant is set to be developed at Córtes, while an interconnection between the Central American electricity system and Mexico is also slated.

Mexico Foreign Secretary Marcelo Ebrard, who was a key figure in recent discussions with the Trump administration to avert U.S. tariffs on Mexican goods, has said he is soliciting U.S. support for the plan. But the United States is not expected to be the only backer. Mexican and Eclac officials are seeking commitments from Canada, while Japan and the European Union, among others that have long-standing cooperation agreements with Central America, are also being approached.

The Central American electric transmission system, known as Siepac, regarded by many as a successful showpiece of regional integration, was concluded in late 2014. The 230 kW Siepac power line stretches from Aguacapa in southern Guatemala to Veladero in Panama, a distance of about 1,800 kilometers (1,200 miles).

The new plan proposes an electricity interconnection from Tapachula to Aguacapa, directly linking the Mexican power system to Siepac. The total investment required would be $465 million, Eclac executive secretary Alicia Bárcena said in a presentation.

Other projects that form part of the plan are improvements to infrastructure along the 950-kilometer Mexico-Guatemala border, whose notorious porosity has long been a bone of contention for U.S. officials.

However, natural gas would form the glue of economic development, with the plan’s spinal column the pipeline to integrate southern Mexico and Central America, bringing the current North American surplus of natural gas to the Northern Triangle nations at an attractive price.

There are concerns, however, about whether the plan will be a success.

Former Costa Rica energy minister Roberto Dobles said he worries about the project’s viability. “About seven or so years ago there was an attempt to copy the success of the Siepac by following it up with a natural gas version based on a pipeline,” he told NGI’s Mexico GPI.

“The idea met with an enthusiastic response,” but the Inter-American Development Bank (IDB) “hurled a bucket of cold water on to the plan. The bank simply said that the pipeline proposal was not economically viable.”

Executive director Alejandro Alle of El Salvador-based Energía del Pacífico told NGI’s Mexico GPI that he believes LNG can be an important first step. EDP is building an LNG reception terminal and 378 MW gas-fired power plant at the port of Acajutla in El Salvador, where the plant would be the first of its type in the Northern Triangle. The project, valued at more than $1 billion, was funded in part by a $350 million loan from the U.S. Overseas Private Investment Corp. (OPIC).

“Our financial agreements ensure us that we can be objective on market issues,” Alle said. “So we don’t have any axe to grind on the project. But the IDB was right at the time on the viability of a pipeline. If a study is being proposed now, we should look at it carefully, but I would not be surprised if the IDB were to reach the same conclusion for a second time.”