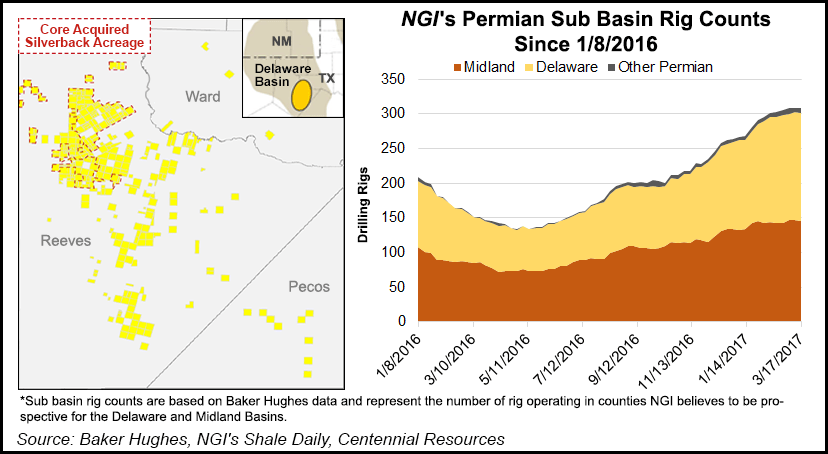 Papa, who retired from EOG in 2013, last yearhelped launch blank check explorer Silver Run Acquisition Corp. with a financial assist from Riverstone Holdings LLC. In October, Silver Run and affiliated Silverback, again with Riverstone’s assistance, took an 89% stake in Centennial and assumed the brand, with Papa as chairman and CEO.

Centennial now controls more than 77,000 net acres and nearly 2,000 drilling locations in Reeves County, in the heart of the southern Delaware sub-basin. Five rigs are running in the play, with a sixth to be raised by the end of June.

The Denver-based exploration and production (E&P) company also has since last fall added 30 people to its management ranks, bringing the workforce to 70. The company is clicking on all cylinders, Papa said.

“I think we’ve got the complete package here,” Papa said during a conference call Thursday. “Our goal isn’t to be the biggest but simply the best at what we do.”

Most impressively, Centennial expects to hit a 50,000 b/d target in oil production alone from the Delaware acreage by 2020.

“I’m pretty sure that’s the highest four-year CAGR oil growth rate of any public E&P company, except perhaps a micro-cap,” i.e., U.S. public companies that have a market capitalization of roughly $50-300 million, Papa said. “The expected boe four-year CAGR is over 75%.”

Assuming future production profiles based upon actual results from recent wells completed in both legacy Centennial and Silverback acreage, “we estimate these wells will generate an average internal rate of return of approximately 55%, assuming flat pricing of $55.00/bbl for oil and $3.00/MMBtu for gas,” Papa said.

Oil growth “would be generated only from developing the Wolfcamp A and B zones of the Delaware. Bone Spring interval testing is to begin later this year, “and any contributions from the Bone Spring, Avalon or Wolfcamp C will be additive to our already high growth rate.” Additionally, because volumes “will be growing so fast,” unit lease operating expenses and general/administrative costs “should be among the lowest in the industry no later than 2018,” he said.

”Icing On the Cake’

“The icing on the cake is technical excellence. Those who know me from my former life, know my belief that everything flows from technical excellence. We’ve already recruited the quality technical team at Centennial that’s the foundation for the kind of well results I’m used to,” with many of the new hires bringing Permian experience from publicly held production companies.

“By year end, we expect to achieve repeatable well results that are the best in this area of Reeves County.”

Centennial is continuing to pick up land in the area as it’s available, small parcels that with contiguous acreage may pay big dividends. Last year, for example, the E&P added 3,900 net acres in Reeves for around $5,000/acre. Expect more acquisitions, the CEO said.

Centennial’s recent well designs in the Delaware use about 2,000 pounds/foot of proppant for fracturing (fracking) and up to 15 clusters/stage, which represent one-third more proppant and five times as many clusters as the original concept.

The E&P is “pretty close to checking the optimum frack box,” Papa said. “In the next six months, we can give any company in Reeves County a run for their money in terms of best wells drilled, best internal rates of return…We’re not there yet, but that’s our goal and we’re no more than six months away from getting there. Now we have the staff, and now we are checking the boxes on the items to get done there.”

The recently completed Sieber Trust 4H well was the first to use 10 clusters/stage and had an initial production (IP) rate over 30 days of 1,759 boe/d, 73% oil. The well targeted the Upper Wolfcamp A with a 5,000-foot effective lateral. In addition, the CWI State 7H well, also in the Upper Wolfcamp A interval, with a 4,300-foot effective lateral was completed with an IP of 1,076 boe/d, 75% oil.

The well design changes are being combined with more geosteering to improve well productivity and recovery rates. The company revamped its well completion design with 24-hour geosteering and recently restructured its management, bringing the expertise in-house, Papa said.

Up to now in the Delaware, operators have been “anxious to just earn their acreage,” Papa said. “So you earn to the deepest well you’ve completed, which would be the Wolfcamp zones. Everybody is focused on completing Wolfcamp, which earns you Bone Spring and Avalon rights.”

With oil prices low, no one had been trying to delineate Bone Spring. But when Papa came on board, he said he wanted to go after delineating the intriguing interval.

“What we’re doing right now is some pressure tests on Bone Spring acreage and trying to ascertain if its geopressured,” which refers to reservoir fluid pressure that exceeds hydrostatic pressure.

“That’s pretty important, to see if we are in a pressure cell or not,” Papa said. “We’re going into some old vertical wells on the 77,000 acres and doing some…tests to see what the pressure gradient is in Bone Spring. We’re specifically looking at the Second and Third Bone Spring shales. Those are the main targets, as opposed to the First Bone Spring and the Avalon.”

“We are seeing improved well productivity from the impact of enhanced completion techniques combined with 24-hour geosteering,” Papa said. “Our goal is to become a technical leader in geoscience, and we will continue to focus on this objective through 2017 and beyond.”

Total capital spending this year is set at $543 million, including $470 million for drilling and completion (D&C) activity. Sixty to 70 wells are planned. The D&C budget is to focus on the Upper and Lower Wolfcamp A zones, with plans to test additional zones through the year.

“We remain bullish on the long-term prices of oil as we believe global demand will begin to outpace global supply within the next four years,” Papa said.