Despite no traction on similar issues in recent years by esteemed leaders from both sides of the aisle, 13 Fortune 500 CEOs, including those from BP plc, Royal Dutch Shell plc, Dominion Energy, DTE Energy and PG&E Corp. called on President Trump and Congress to impose an economy-wide carbon pricing policy and enact climate change reforms. 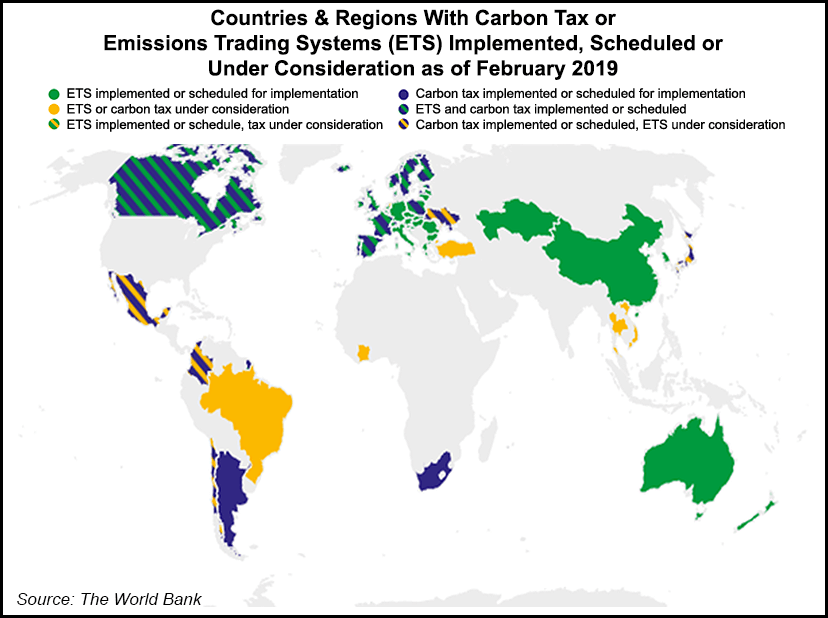 The CEOs advocate for six principles “to inform and accelerate federal climate legislation.” They called for significant reductions in U.S. greenhouse gas emissions so that the country “is demonstrably a leader” for global efforts to limit the effects of climate change.

U.S. policy “should ensure the country is on a path to achieve economy-wide emissions reductions of 80% or more by 2050, with aggressive near- and mid-term emission reductions commensurate with this goal,” the group said.

The timeline for reductions “must allow capital-intensive industries to adjust in an economically rational manner,” according to the second principle, with policies to encourage investment and planning decisions that focus on emissions reductions outcomes, not specific resources or technologies.

The third principle around enacting a carbon price, is “the best way to use the power of the market to achieve carbon reduction goals in a simple, coherent and efficient manner” with the least cost to the economy and households. “Markets will also spur innovation and create and preserve quality jobs in a growing low-carbon economy.”

Actions must be “durable and responsive” under the fourth principle, with policies that ensure predictable results and increase public support. The fifth principle is to do no harm, as the policies enacted have to support the competitiveness of the U.S. economy and address “emissions leakage that can undermine climate objectives.”

London-based BP, long an advocate for carbon taxes, said it supported the goals of the 2015 United Nations climate accord and a “well-designed, economy-wide price on carbon” would help achieve them.

The CEO Climate Dialogue “will help inform the bipartisan discussions needed to enact effective carbon-pricing policy in the U.S.,” said BP America Chairman Susan Dio. “Only by working together — industry, government and society — can we solve the dual challenge of providing more energy with fewer emissions and move toward the low-carbon future we all seek.”

Shell President Gretchen Watkins said the European-based supermajor has “long recognized the climate challenge and will continue to play our part in addressing it. That includes re-shaping our portfolio to produce lower carbon products and following up our emissions reductions aspirations with measurable targets — an industry first.”

However, “an effective carbon pricing policy…is one of the strongest levers we can pull to foster innovation, inspire new technology and drive lower carbon consumer choices.”

It’s not a new idea, and in fact, carbon taxes have been proposed in some form or another for years. None have made it beyond committees.

A bipartisan group of House lawmakers last fall proposed yet another national carbon tax, with all of the revenue to be returned as a rebate to taxpayers and some dependents. That effort has gone nowhere.

Likewise, Republican stalwarts and former Secretaries of State James A. Baker III and George P. Shultz in 2017 launched a coalition to pursue a national carbon tax. Again, the proposal was left on the table, even with corporate support from BP and Shell, as well as ExxonMobil Corp. and Total SA.

ExxonMobil, BP, Shell and Total are corporate founders of the Climate Leadership Council, which is working to replace some U.S. environmental regulations with a simplified carbon tax on businesses.

Big Oil operators and many independents have for years used carbon pricing in their operations as greenhouse emissions are regulated in some regions of the world already.

Utilities, whose customers increasingly are requesting more renewables in their power mix, are encouraging a carbon tax as well.

Dominion has “embraced the opportunity to deliver cleaner, affordable and reliable energy” for more than a decade, CEO Tom Farrell said, noting the utility’s carbon dioxide emissions “have declined by more than 50%, and over 85% of our generation comes from low or no carbon sources.

Detroit-based DTE is working to reduce 80% of its carbon emissions by 2040, and “companies across our sector are on similar ambitious paths,” CEO Gerry Anderson said.

Likewise, Exelon CEO Chris Crane said customers “demand swift action on climate change to protect our communities, our environment and the safety and reliability of our energy infrastructure. “We have long supported carbon pricing as the fastest, most economical way to both reduce emissions and encourage investment in new and existing clean power sources.”

Helping California achieve its strict emissions reductions goals “is as strong as ever,” said PG&E CEO Bill Johnson. “Effective climate policies start with a constructive dialogue among the full spectrum of stakeholders.”

EDF President Fred Krupp said corporate advocacy was the “most underused tool for fighting climate change…Business voices matter to Congress, but the vast majority of companies have been missing from the climate policy debate — or even worse, have been lobbying against environmental progress.

“Together, the CEO Climate Dialogue companies are using their political influence to chart a new course for corporate sustainability leadership and drive down pollution across the economy.”