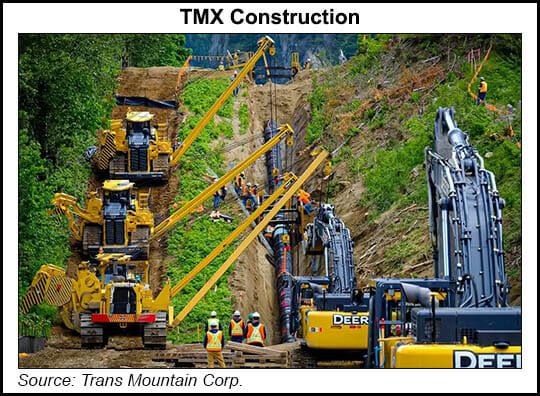 The Canada Energy Regulator (CER) on Monday authorized the construction change, observing that no opposition had emerged against the new TMX route past the Coldwater Indian Band’s homeland in a mountain valley 270 kilometers (170 miles) northeast of Vancouver. The expansion would triple the amount of crude oil capacity on the existing Trans Mountain system to 890,000 b/d. The system carries oil from landlocked Alberta to the British Columbia coast.

Coldwater had supported the detour as an acceptable settlement of its years-long objection to the project. The new route, known as the West Alternative, moves the TMX pipeline downhill and away from an underground aquifer that the tribe taps for its water supply.

Trans Mountain, a federal Crown corporation, had sought brisk approval of the change to preserve its schedule for the project. In-service is targeted for the end of 2022, according to the company’s website.