Pipeline capacity shortages, supply backlogs and competition in the United States will add up to poor prices and hard times in 2019 for Canadian natural gas and oil, industry service firms predicted. 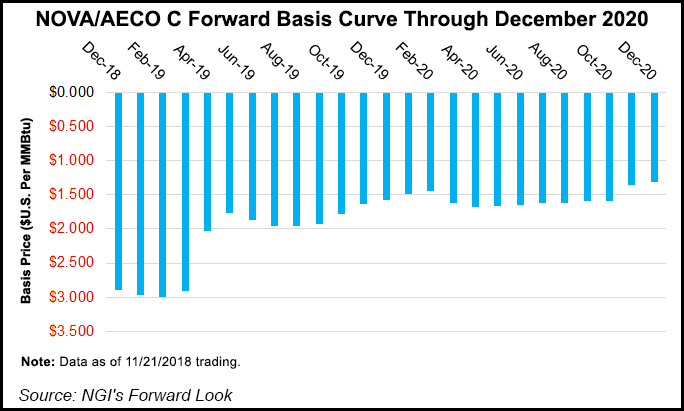 An annual forecast released Thursday by the Canadian Association of Oilwell Drilling Contractors (CAODC) called for a well count of only 6,962 next year, up by just 51, or less than 1%, from the 6,911 in 2018 that showed no improvement on 2017.

“The lack of activity is not hard to understand,” said CAODC President Mark Scholz. “The Canadian oil and gas industry is simply too dysfunctional to anticipate any kind of quick recovery.”

His bleak message, delivered to a breakfast meeting where the CAODC released its new forecast, set the tone for a day of venting popular frustration in the Canadian industry capital of Calgary over economic conditions and government inaction.

Worried workers chanted, “build that pipe,” during a demonstration outside a meeting hall where Prime Minister Justin Trudeau visited the city’s business and political leaders but made no new promises to help.

Long oil trains have become the fallback delivery method for production growth left stranded by cancellations of the Northern Gateway and Energy East pipeline proposals, and delays of the Trans Mountain and Keystone XL projects.

Discounts inflicted on low-grade Canadian heavy crude fighting for space in full pipelines at times lop as much as C$50 ($40) off of international benchmark prices for premium light oil. The Alberta government estimates production revenue losses to be C$80 million ($64 million) per day. The growing loss total is shown on an electronic billboard rented by Notley’s regime in a prominent spot in Ottawa.

Trudeau, whose government bought the Trans Mountain export pipeline to the Pacific coast of British Columbia for C$4.5 billion ($3.6 billion) only to suffer a setback for its proposal to triple capacity to 890,000 b/d, agreed that the industry was in “crisis.”

As the prime minister toured Calgary, the NEB was beginning “reconsideration” hearings on the Trans Mountain project. The lengthy second review results from a summer decision by the Canadian Federal Court of Appeal to overturn the pipeline’s expansion approvals by the NEB and Trudeau’s cabinet.

Rather than promise any action beyond accelerated tax write-offs for new equipment in all industries that Finance Minister Bill Morneau announced Wednesday, Trudeau described his Calgary visit as an opportunity to listen. He heard from energy executives, the Calgary Chamber of Commerce and Mayor Naheed Nenshi as well as demonstrators who turned out in strength and blocked a downtown street.

The CAODC’s president expressed the widespread frustration. “With the exception of perhaps Venezuela, Canada is the only oil and gas producing jurisdiction in the world that cannot at the very least see a recovery on the horizon,” Scholz said. “We have among the highest standards for responsible development in the world, yet our products are sold at bargain basement prices.”