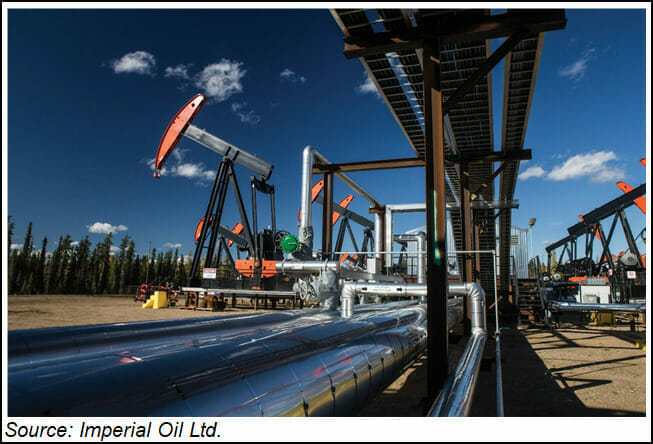 “After a challenging start to 2022 with some significant weather impacts, I’m very pleased to say that our operations returned to normal in the second quarter, which underpinned the outstanding results that we reported earlier today,” Imperial CEO Brad Corson told analysts.

Imperial is majority owned by ExxonMobil.

“The high price environment continued through the quarter, and the focus we put on reliability and strong operating performance allowed us to take advantage of this environment,” Corson said. “I think it’s also important to note that this performance comes when Canadians need it most, as global challenges have resulted in supply disruptions and subsequent price escalations.”

Adaptations to Canada’s climate change policies have emerged as growth items on the agenda for Imperial and its peers.

Corson said Imperial was continuing to “progress a broad range of technology initiatives, including through our support of the Pathways Alliance and its application for carbon capture storage space…”

Imperial also recently announced plans for a lithium-extraction pilot in Alberta, with potential use in battery-grade products and a hydrogen production feasibility study in Nanticoke that could help reduce Ontario emissions.

“The steps we have taken to focus our portfolio, reduce costs and efficiently grow production position us to continue returning substantial cash to shareholders going forward,” he said.

Meanwhile, CNRL’s CEO Tim McKay told investors that an evolving Canadian government “hard cap” on GHG emissions would be resisted, echoing other oilsands E&Ps in the Pathways Alliance of which Imperial and others are members.

The proposed cap is “unnecessary,” McKay said, as the Alliance has devised a plan to cut annual emissions as of 2030 by 22 million tons, including via a carbon capture and storage project.

The cap, said McKay, “is unnecessary and overly ambitious in light of our stated preference for governments and industry to continue to work together through the Pathways initiative to achieve an already announced emission reduction target.”

The market value for CNRL’s liquids crown jewel, 393,188 b/d of oilsands bitumen, upgraded into synthetic crude oil, climbed during 2Q2022 to a US$5.93/bbl premium to West Texas Intermediate. The price increase was supported by “lower volumes in Western Canada due to maintenance at oilsands facilities,” management said.

CNRL announced an August special dividend of $1.50. The bonus adds about $1.8 billion to dividends of $2.4 billion plus $4 billion in share buybacks so far in 2022.

“Our financial position continues to strengthen, allowing for incremental returns to shareholders,” said CFO Mark Stainthorpe. “Through third quarter 2022, we will continue to target to allocate 50% of our free cash flow to share repurchases.”

At Suncor, management confirmed that selling the refined products chain in Canada is being considered under an agreement with stockholder activist Elliott Investment Management LP.

“Suncor will also be undertaking a strategic review of its downstream retail business with the goal of unlocking shareholder value,” management said. “With the support of external advisers, this review will evaluate and consider a wide range of alternatives, from a potential sale of the business to options to enhance the value.”

For the  upstream business, acting CEO Kris Smith emphasized organization and safety improvements in response to criticism by Elliott. Smith stepped into the role when former CEO Mark Little resigned in July after a series of fatal oilsands mishaps.

The gains enabled Suncor to pay stockholders $3.2 billion in dividends and through buybacks.

The declines were attributed to “the impact of significant planned turnaround and maintenance activities during the quarter,” management said.

Cenovus profits climbed in 2Q2022 year/year to $2.4 billion ($1.23/share) from $224 million (11 cents). The company also delivered more than $1 billion to shareholders in the latest quarter, in addition to the base dividend.

“We executed on our commitment of returning 50% of excess free funds flow to shareholders in the quarter while maintaining strong operational and financial performance during a period of significant planned turnarounds and maintenance,” said CEO Alex Pourbaix. “And we’re well positioned for even better performance in the second half of the year as our assets return to operating at normal rates across the portfolio.”

Cenovus also is buying out BP plc’s half-stake in a Toledo, OH, oil refinery for US$300 million.

“This transaction solidifies our refining footprint in the U.S. Midwest and increases our ability to capture margin throughout the value chain,” said Pourbaix.

BP indicated Cenovus plans to retain nearly 600 employees at the plant, which has capacity to produce 160,000 b/d of oil into gasoline, diesel, jet fuel, propane, asphalt and other products.

Andrew Baker and Gordon Jaremko contributed to this story.