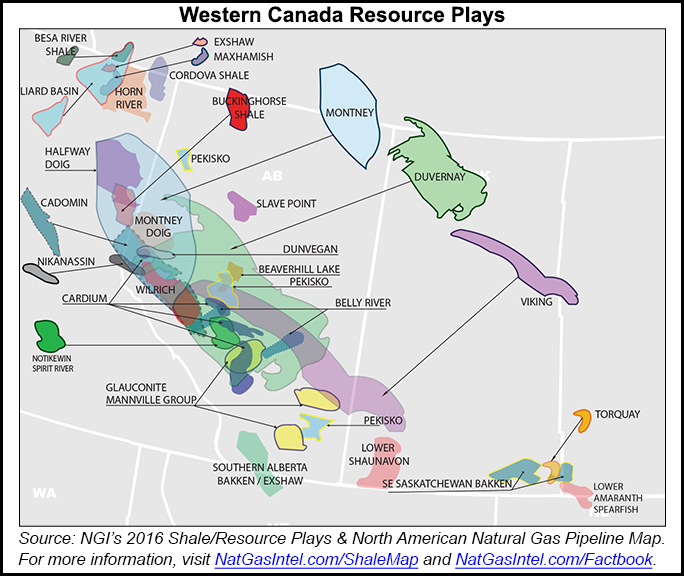 BMO Capital Markets, a Bank of Montreal investment arm active in the United States as well as Canada, delivered the verdict during a review of technical progress with the deposit held by the Canadian Society for Unconventional Resources (CSUR).

A comparative study by the investment house of the Duvernay and U.S. shale formations such as the Permian and Eagle Ford concluded that the fledgling Canadian gas and liquid byproducts quarry offers “attractive internal rates of return.”

The firm examined early results of a shale exploration and development drive, which has generated industry spending of about C$10 billion (US$7.5 billion) to obtain mineral rights.

Shell Canada started the buying with a C$5.9 billion (US$4.4 billion) cash takeover of Duvernay Oil Corp. to obtain its untapped spread of properties in 2008. Other firms followed Shell into the formation by spending about C$4 billion (US$3 billion) at Alberta government petroleum lease auctions.

The Duvernay underlies 100,000 square kilometers (40,000 square miles) of Alberta along the eastern side of the Rocky Mountains from Grande Prairie in the north to Red Deer in the south, at a depth of 2,000 meters or more.

The Alberta Geological Survey estimates the formation’s in situ resource endowment to be 443 Tcf of gas, 11.3 billion bbl of liquid byproducts and 61.7 billion bbl of oil.

Earth scientists credit the Duvernay as the “source rock” for migration of oil and gas into traps or flowing pools formed by Devonian fossil reefs that the Leduc discovery well found near the Alberta capital, Edmonton, to start the modern Canadian industry in 1947.

Efforts to unlock the wealth that remains in the impermeable shale, with horizontal drilling and hydraulic fracturing, focus on about 19,500 square kilometers (7,500 square miles) of liquids-rich “sweet spots.”

At the CSUR meeting, specialists Jeff MacDonald of Shell, Jon Remmer of Encana Corp., Aaron White of Murphy Oil and Braden Bowie of Apache described intense work on engineering and planning to adapt the technology profitably to Duvernay conditions.

Encana, to date the largest operator, rates the Duvernay as one of four “premium” formations worth developing in the U.S. and Canada during the current low on the energy price cycle. The company’s current investor presentation reports strong Duvernay well results: up to 250 bbl of liquids per million cubic feet of raw gas flows, and operating profits of C$25 (US$18.75) on each barrel of oil equivalent that work out to C$13 (US$9.75) in corporate income after all expenses.

Although Duvernay activity remains too young for forecasts of eventual total production, Smith Low said it has a special attraction for Canadians. The formation is rich in condensate or natural gasoline, which fetches premium prices in Alberta. The gas byproduct is in high demand as diluent for pipeline shipments of bitumen from oilsands plants, which currently import the light liquid at a rate of 175,000-225,000 b/d.