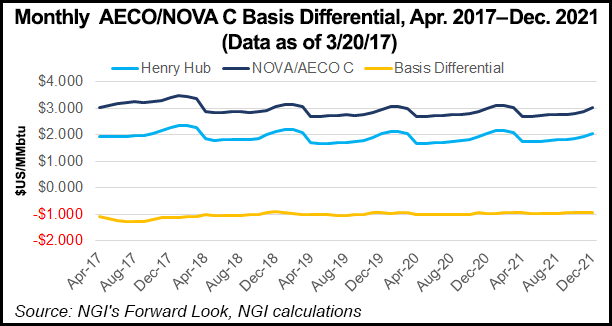 The collective loss, according to the Conference Board of Canada’s Canadian Industrial Outlook: Gas Extraction, is expected to drop to C$2.8 billion ($2.1 billion) this year from C$7.6 billion ($5.7 billion) in 2016, with the red ink flowing until late 2018.

The forecast described Canadian gas suppliers as struggling in “survival mode.” Improved financial results will follow a gradual price recovery from 2016 lows instead of regaining market shares in the United States, Ontario and Quebec.

“North America’s regional natural gas market has changed greatly over the last decade,” said the board’s economist Carlos A. Murillo. “Rising U.S. shale production has increasingly squeezed Canadian natural gas out of some U.S. markets. And not only is the U.S. market moving toward self-sufficiency, but the U.S. gas industry is also beating Canadian competitors in the race to enter global LNG markets.”

U.S. gas production increased by 40% in the last decade, mainly because of rapid increases in shale/tight gas output, the board noted. In the meantime, total Canadian gas production stagnated.

“Today’s U.S. shale production is about three times greater than total Canadian production,” the board said. “With U.S. shale gas production displacing imports of Canadian gas, Canadian exports are now 25% lower than they were 10 years ago.”

Over the forecast period, North American gas demand is expected to remain relatively flat, and in turn, Canadian exports to the United States could continue to decline over the next five years. Although gas use in Canada’s electricity generation and industrial sectors is seen increasing, these gains are not expected to be enough to offset a potential decline in exports.

However, there is good news for Canada’s gas industry, he said.

“The rapid buildup of U.S. LNG export capacity in the coming years, and the associated contractual obligations, indicate that export increases will outpace production gains south of the border. This creates an opportunity for Canadian gas to help fill some regional demand in the United States.

“Moreover, some Canadian producers are signing contracts to export gas as LNG via the United States indicating that, while LNG export facilities in the US are competing head on with Canadian projects, they may also provide a new marketing outlet.”

In addition, TransCanada Corp.’s recent success in securinglong-term commitments for its gas Mainline is another positive development for the industry, Murillo said.

“Key to this deal is that Western Canadian gas may manage to hold onto, and possibly increase, its market share in Central Canada and the northern United States,” he said. “Since our current outlook doesn’t incorporate the impact of this deal, it shows the potential effects on Canada’s industry from failing to reach such necessary consensus between shippers and pipeline owners.”

During 2016, above-average temperatures helped drive gas inventories well above historical norms, the board said. Combined storage levels in Canada and the United States in 2016 were close to 20% higher than their five-year average. This, in turn, sent prices to their lowest levels in nearly two decades.