Permian pure-play Callon Petroleum Co. plans to boost production by more than 20% in 2019, while moving forward with large-scale development projects in the Permian Basin’s Delaware formation. 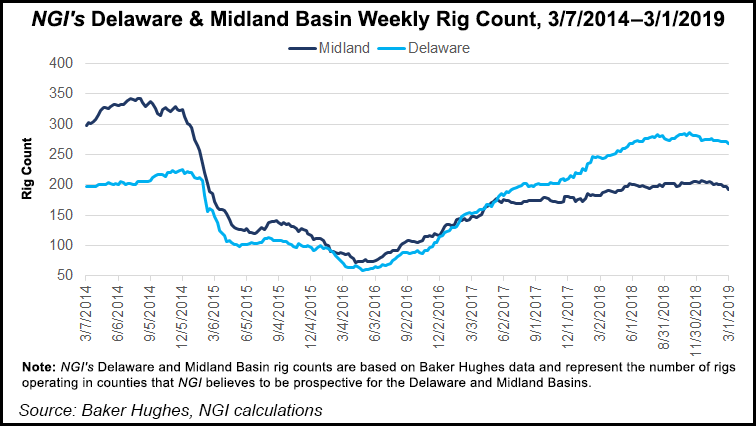 During a quarterly earnings call Wednesday, CEO Joe Gatto said Callon intends to follow up its success with mega-pads in the Midland with larger pads in the Delaware, both on legacy acreage and a leasehold it acquired last year, including about 28,000 net acres in the southern Delaware that it purchased from Cimarex Energy Co. for $750 million.

“We expect to benefit from meaningful cost savings from the transition, but also realize longer-term benefits from co-development of a resource system across multiple delineated intervals,” Gatto said. “In addition, we will continue to deploy simultaneous operations of completion crews on some of the larger pads to preserve our rate of cash conversion.

“While we’re clearly maturing our business model, we have not lost sight of the potential to organically replace inventory throughout our asset base…our focus now turns to optimization of our footprint, which means identifying opportunities that enhance the value of our current acreage and looking to add additional operating areas.”

Despite plans to run only a single completion crew for half of 2019, the company still expects the shift to longer laterals will increase full-year production by more than 20% at the midpoint of guidance, said COO Jeff Balmer.

“The early portion of our capital program is shifted toward the Midland Basin, and then we’ll begin completing and bringing on production in the Delaware during the second half of the year,” Balmer said. “Much of this year’s program focuses on proper resource capture and mitigation of longer-term parent-child impacts.

“In addition, we try to be thoughtful about applying proper risk profiles for these larger developments to account for the potential of longer flowback times, offset frac impacts and other normal operational issues that can arise when shifting to a larger multi-well projects and a new asset area. The backend loaded nature of this program sets us extremely well for 2020.”

Callon brought online nine wells gross during 4Q2018 within in the Monarch operating area of the Midland. The wells achieved an average peak 24-hour rate of 235 boe/1,000 lateral feet. It also had a three-well pad in the WildHorse operating area that produced at a rate of 190 boe/d through the first 30 days.

Callon plans to complete a five-well pad in the Midland targeting the Wolfcamp A interval on 10-well spacing by the end of March.