California oil and natural gas permits for well abandonments to date this year are twice the number of new drilling permits being sought, according to regulators. 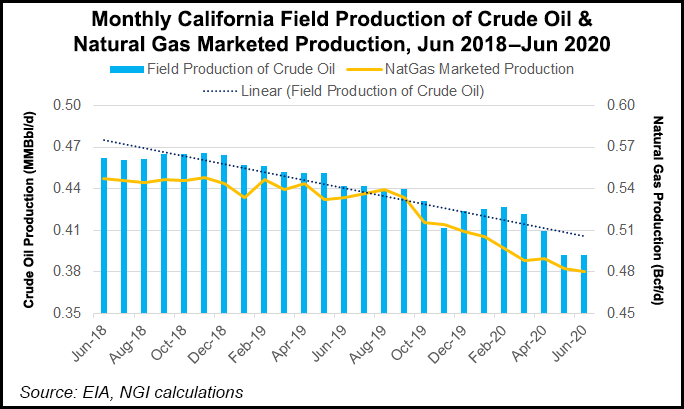 CalGEM earlier this year issued its first well stimulation permits. Total new permits approved in the first half of the year versus a year ago were up 7%, but new wells drilled were down 90%.

“Permits for safely sealing wells, or well abandonments, are outpacing permits for new wells by more than a two-to-one margin, and about 40% of our approved permits are for well abandonment, which far exceeds the percentage of permits approved for drilling new wells,” said CalGEM’s Uduak-Joe Ntuk, oil and gas supervisor .

Consumer Watchdog and FracTracker Alliance in a separate report claimed the state had issued 190% more permits for drilling this year. The groups post permit numbers and locations on an interactive map, which lists 7,474 permits since January 2019.

“Consumer Watchdog’s report does not provide an accurate picture of permits approved during 2020,” Ntuk said.

California’s largest producer California Resources Corp. (CRC) last month told NGI that year/year, the number of drilled wells and production have both decreased, independent of its permit inventory. CRC drilled 73 wells in the first half of this year, compared with 99 during the same period in 2019. The drilling permit inventory increased by 167 from 29.

“The increase in our permit inventory primarily reflected our work with our joint venture partners on previously announced development projects, as well as continued refinement of our drilling plans for specific fields and formations,” said Vice President Margita Thompson. “We completed six well stimulation treatments in the first half of 2019 and none in 2020.”