An aerial study of 238 natural gas-fired generation plants in California has concluded they are responsible for 2.1% of the state’s methane emissions from point sources. 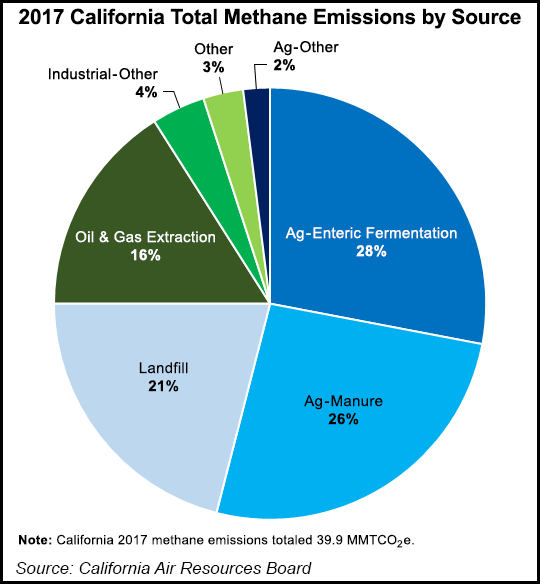 Jet Propulsion Laboratory researchers earlier this summer completed the survey using its remote sensing technology. Study flights were conducted in five phases during 2016, 2017 and 2018, covering at least 60% of the point source areas.

Point source areas included oil and gas operations, gas transmission/distribution and storage, and gas-fired power generation, whose sites represented 55% of the ones surveyed.

No “compelling evidence of strong methane emissions” were found in abandoned oil or gas wells or from hydraulic fracturing operations. However, “more detailed analysis is recommended to confirm that,” researchers noted.

For 15 of the top associated gas producing fields in the San Joaquin Valley, the mean production-normalized emissions rate was 4.2%. Further, the researchers said the prevalence of methane plumes varied significantly by oil and gas field.

“The Poso Creek and Kern Front fields exhibited some of the highest density of methane plumes in the state, both dramatically higher than other nearby oil fields such as Kern River and Round Mountain. There is no apparent correlation with oil and gas production in this case as all of these fields are relatively low gas producers whereas Kern River produced nearly six times as much oil in October 2016 as each of the other three fields.”

Around 79% of the oil and gas sector emissions in the study are attributed to production. Spatially, 85% of point source emissions from production were concentrated in the southern San Joaquin Valley, the state’s primary producing area.

Some of the observed emissions overall from generation sites are larger than those reported to the state environmental protection agency, but the team concluded they were not a major methane emitting sector. Collectively, they were responsible for 2.1% of total emissions, according to the study.

“The research team acknowledges the possibility that a few cogeneration facilities located within the oil and gas fields currently attributed to the oil and gas sector may be appropriately classified under the power generation sector. However, study results would not significantly change were this reclassification made.”

The natural gas delivery and storage segments accounted for 4.9% of the point source emissions. All 12 underground gas storage facilities were surveyed multiple times. There were no leaks in transmission pipelines detected.

The Los Angeles Department of Water and Power operations were surveyed, including the gas-fired 512 MW Valley Generation Station. It was found to be a small emitter and not a high priority methane source.