Occidental Petroleum Corp.’s spinoff, California Resources Corp. (CRC), on Thursday reported positive earnings for all of last year and revealed plans for a $250 million joint venture to boost output from its oil/natural gas properties in California. 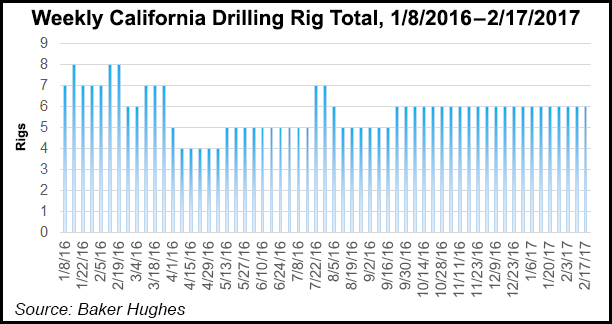 CRC CEO Todd Stevens said the company was “moving from defense to offense” in its strategy, and the JV provides “an excellent opportunity for [us] to accelerate development of CRC’s vast underdeveloped resources base” while advancing the continued long-term strategy of reducing the company’s overall debt. In 2016, CRC reduced its debt by $900 million, Stevens said.

CRC’s JV is with Benefit Street Partners LLC (BSP) and will invest in the CRC California properties with a focus on development opportunities in multiple producing fields, a company spokesperson said. CRC will continue to operate the properties.

BSP will invest up to $250 million for development opportunities in both CRC’s conventional and unconventional assets in California, starting with a $50 million investment and continuing in tranches of up to $50 million each during the next two years. BSP Managing Director Tim Murray said he views CRC’s “diverse asset base as an excellent opportunity” for structuring a JV.

In response to an analyst’s question, Stevens said BSP would earn a return on each well for a pre-determined production level and after that the JV invested wells would return to being 100% CRC’s share.

“We’ve been talking to people about potential JVs for some time,” Stevens said. “This one came about from active discussions in recent months, and we thought Benefit Street was a good mix for us to help accelerate our development plans.”

Separate from the JV, Stevens noted that CRC plans to spend $300 million in capital investments this year, a marked increase after the company’s hunkered down approach the past two years since the spinoff from Oxywas completed in late 2014.

In 2016, Stevens said CRC increased in probable and possible reserves by 130%. “Our field development plan and better-than-expected well performance allowed us to replace 71% of our production, excluding the effect of price adjustments, despite a very limited capital program [last year],” he said.