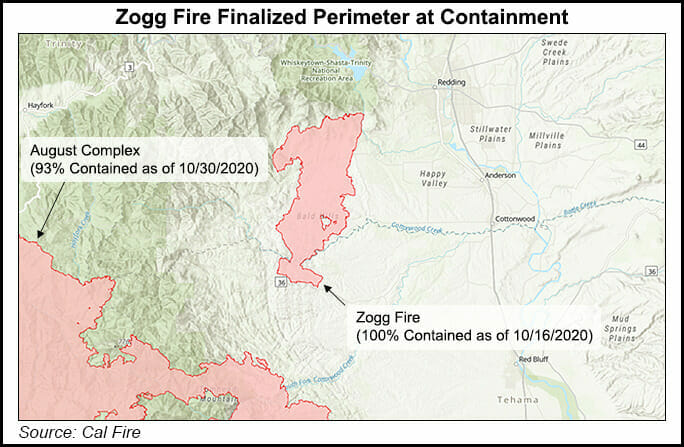 PG&E is under scrutiny for its potential role in causing several North California wildfires, including the Dixie fire, considered the second largest in state history. To strengthen its oversight of PG&E’s safety performance, California regulators in August established an independent safety monitor to help shape daily operations.

In response, PG&E CEO Patti Poppe said the company has accepted the California Department of Forestry and Fire Protection’s determination, reached earlier this year, that a tree contacted its electric line and started the Zogg Fire.

“We accept that conclusion,” she said. “But we did not commit a crime.”

Poppe added that the utility is investing more than $1.4 billion this year in vegetation management, removing 300,000 trees and trimming 1 million more. It also is working toward burying 10,000 miles of power lines, and installing remote and micro grids to eliminate the wires altogether.

The new proposed regulation would adopt 32 safety and operational metrics for PG&E covering electric (wildfire) safety, electric reliability and natural gas safety. Beginning in early 2022, PG&E would be required to file biannual reports with the CPUC that would include historical data for each metric, a narrative description of progress on each metric toward proposed targets and a description of current and future activities to meet the proposed targets.

Newly established metrics include tracking specific safety-related inspections within areas and communities highly threatened by wildfire. PG&E would also be required to track the frequency and duration of electric power disruptions, as well as track serious injuries and fatalities of members of the public, as well as PG&E employees and contractors, CPUC said.

CPUC engineers and analysts would use qualitative and quantitative techniques to assess current data and historical trends for each metric.

The data evaluation would provide ways to identify and examine “safety incidences or outcomes that deviate from positive performance trends for informing inspections, compliance audits, possible investigations and enforcement actions by the CPUC.”