Opportunities for natural gas vehicles (NGV) could emerge from local and state initiatives unveiled in California this week where the political leadership is locked in an aggressive response to climate change. 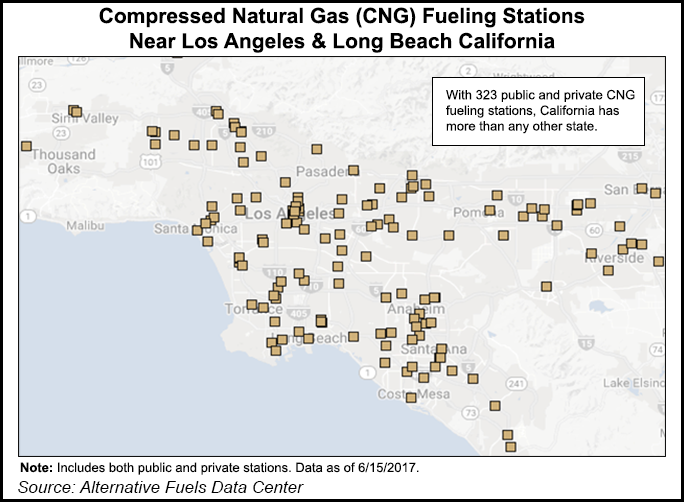 The mayors of Los Angeles and Long Beach on Monday jointly announced a reinvigorated effort to clean up the smog at adjacent ports, which together represent the busiest harbor in the nation and where 40% of all domestic imports are handled.

A two-page declaration mandating that the ports “shall advance clean energy technologies and other efforts to move toward the goal of zero emissions,” was unveiled by Los Angeles Mayor Eric Garcetti and Long Beach Mayor Robert Garcia, giving a clear opening for the new near-zero emission NGV engines and use of renewable natural gas (RNG), or biomethane.

As the region’s largest single source of smog, the two ports have had a clean energy plan in place and are working on targets for reducing air pollution. The mayors’ action commits them to finishing plans by November and sets targets for zero-emission trucks by 2035 and for cargo-handling equipment by 2030.

California NGV Coalition President said he shares the cities’ mutual goals, but “we cannot wait until 2035 in hopes of an unproven technology to replace the diesel-dominated freight movement system that emits more than 40% of all smog-forming pollutants” in the region.

Lawson said immediate benefits can be gained by replacing diesel trucks with heavy duty trucks that use low nitrogen oxide engines with RNG. “This is a game-changing option that we must immediately embrace to reach federal clean air deadlines for the region by 2023.”

Meanwhile, state energy agencies have scheduled a workshop June 27 in Sacramento for later this month to discuss recommendations for the future development and using RNG as called for under state law SB 1383. The California Energy Commission (CEC), California Public Utilities Commission and California Air Resources Board are expected to participate. The RNG workshop is part of this year’s review and update of the state’s Integrated Energy Policy Report (IEPR).

Meanwhile, in Montreal, Canadian utility Gaz Metro and the city’s port authority are advancing liquefied natural gas (LNG) use as a marine fuel, using shore-to-ship equipment at multiple Port of Montreal locations. The first of four LNG asphalt tankers by operator Groupe Desgagnes is set to begin service. The tanker operator, natural gas utility and the port have worked collaboratively to develop the LNG supply system.

A fleet of eight LNG-hauling tanker trucks is used in the port LNG system, allowing up to four fueling tankers to be transferred to a ship simultaneously. Gas Metro and the port expect fueling system to encourage more ships to be converted.

For the Gulf of Mexico, Harvey Gulf International Marine recently took delivery of its fourth LNG-fueled supply vessel, Harvey Freedom, to support a unit of Royal Dutch Shell plc under a five-year contract.

Harvey Gulf CEO Shane Guidry said the contract underscores his company’s “continued commitment to the environment and the success of LNG power.” The other LNG ships are similarly working for the Shell unit. Each ship is powered by three 34DF LNG-diesel dual fuel engines from Wartsila, which supplies its LNGPac onboard fuel systems with tanks capable of holding 78,000 gallons of fuel supplied by Chart Industries.

And in the onshore compressed natural gas (CNG) space, Matheson Trucking Inc. earlier this month said it is adding 27 Kenworth tractor-trucks to its clean fuel fleet as part of its continuing expansion to use CNG.