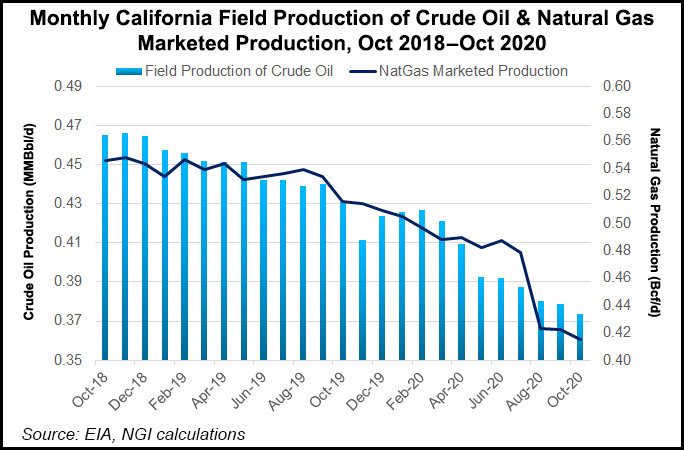 The severe downturn in permitting and new drilling can be seen as a result of the Covid-19 pandemic, “but global commodity prices, our state’s economy and local judicial decisions in Kern County have all contributed to the decline,” said CalGEM spokesperson Don Drysdale.

Production data for the last two years showed in-state production met only about 32% of demand, according to the California Independent Petroleum Association (CIPA).

California contributes only 4% of the nation’s oil production and it’s likely to continue to drop from the list of top producing states, as has been the case over the past few decades, Drysdale said.

Last year’s drilling permit total was down 23% from 2019, and permits for hydraulic fracturing were at their lowest level in history at only 83. The average since 2016 had been 220/year. CalGEM also denied 57 fracturing permits, another state record.

In contrast, a record high was recorded for abandoned/idle wells with 3,238 two-year permits issued to permanently seal them in 2020, CalGEM said. More than half of the permits, or 1,730 oil and gas wells, were for plugging and abandonment in 2020.

“This outpaced the number of new drilling permits issued by 65%,” Drysdale said. “New state policies, combined with increased enforcement, are driving the increase in oil and gas operators permanently removing wells from operation.”

CalGEM last year was criticized for not accelerating efforts to close an estimated 30,000 idle wells.

“CalGEM continues to implement state laws and regulations as mandated, prioritizing public health and safety, and relying on science and sound engineering practices in its regulatory efforts regardless of the direction of our economy and what the future holds,” Drysdale said.

In the City of Los Angeles alone, critics last year reported up to 1,000 abandoned wells threatening mostly poor residential areas. “The oil industry, not taxpayers, pays 100% of the costs to decommission onshore wells without a viable owner,” CIPA’s Zierman said at the time.