California’s use of natural gas during the winter months doesn’t experience quite the dramatic ramp-up it does during the summer, but it experiences multiple peaks and valleys as it balances changes in electricity demand, according to data from the Energy Information Administration (EIA). 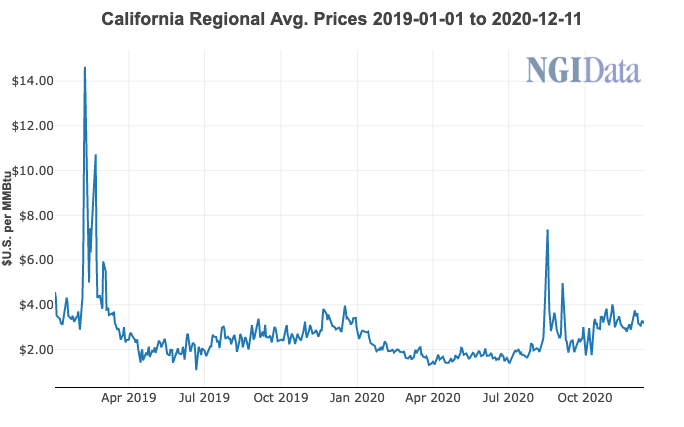 EIA said natural gas use during the winter goes through two cycles each day — ramping up and down in the morning and then again in the evening. California’s hourly natural gas-fired electricity generation in January and February 2020 was often at its lowest point in the middle of the day, the agency said, when solar-powered generation was at its peak.

EIA data shows that in January and February, the average hourly power generation from natural gas hits around 15 GW at around 6 a.m. and again at 6 p.m., averaging around 7.5 GW in the middle of the day. By comparison, hourly natural gas-fired generation on a typical summer day, based on the average of July and August 2020, went from 10 GW for the hour ending at noon to 22 GW for the hour ending at 7:00 p.m.

This past summer was an unusually hot one in California, with the state having to call for power conservation several times as demand neared capacity. The grid operator avoided rolling power outages on most days, but the unexpected loss of a power plant and the loss of nearly 1,000 MW of wind power in mid-August prompted the California Independent System Operator to initiate power outages in the state.

A preliminary report exploring the cause of the outages found that gas-fired plants collectively experienced 1,400-2,000 MW of forced outages through derating or ramping down of plants, mostly from extreme heat or day-of breakdowns.

Demand for electricity and output from natural gas-fired power plants in California often are highest in the afternoon and early evening. However, output from solar power tends to peak and then plateau by midday, rapidly declining by the evening as the sun sets, according to EIA.

“As solar output declines, natural gas-fired generators often have to ramp up, or increase their output, considerably,” EIA said.