The California Independent Systems Operator (CAISO) saw 97.6% of electricity supplied to its grid come from carbon-free sources for a brief moment in early April, the second time this year the operator broke its record for energy generated from renewable resources. 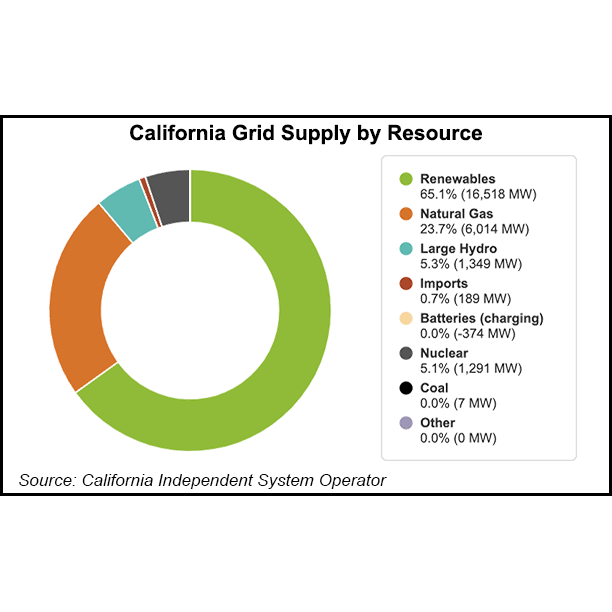 During the late afternoon on April 3, CAISO recorded the peak, which surpassed the previous record of 96.4% set on March 27.

The grid also set an all-time wind peak of 6,265 MW on March 4, followed by a solar peak of 13,628 MW on April 8. CAISO forecasts a potential for more renewable records in April.

“While these all-time highs are for a brief time, they solidly demonstrate the advances being made to reliably achieve California’s clean energy goals,” said CAISO President Elliiot Mainzer.

In 2018, California’s legislature passed Senate Bill 100, which calls for eliminating the use of fossil fuels, including natural gas, for electricity production by 2045.

CAISO recently approved a $2.9 billion transmission plan to support a “rapid acceleration” in electrification. According to CAISO, more than 15,000 MW of grid-connected solar power capacity and nearly 8,000 MW of wind are now online.

The operator said it expects to bring another 600 MW of solar and 200 MW of wind to the grid by June, in addition to 4,000 MW of storage.

CAISO serves 30 million customers and manages roughly 80% of the state’s energy grid, as well as a small portion of Nevada.