While Gov. Gavin Newsom wants California to move toward a net-zero emissions future, eliminating natural gas from the energy mix over the next 30 years may be difficult, according to a recent report. 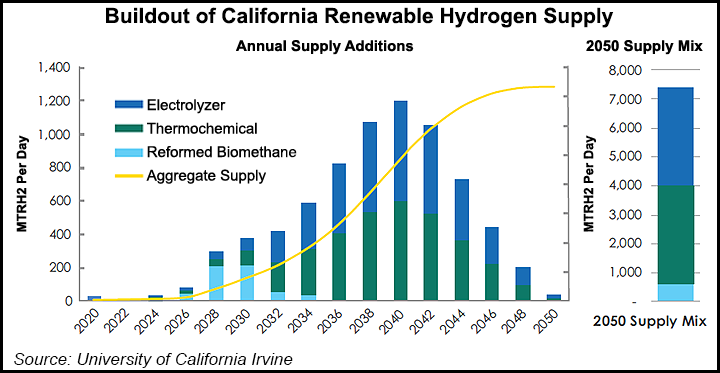 In “The Challenge of Retail Gas in California’s Low-Carbon Future,” academic researchers analyzed scenarios that could meet a goal to achieve an 80% reduction in greenhouse gas (GHG) emissions by 2050 from 1990 levels.

The report preceded an executive order by Gov. Gavin Newsom issued Wednesday, who signaled the state by 2035 should require all new in-state cars and passenger truck sales be zero emission.

“This analysis, and work by others, suggests that achieving the state’s ambitious climate goals is possible, but is far from assured, requiring rapid and near-term transformation in all sectors of the economy,” said the authors of the report.

The analysis for the California Energy Commission was completed by Energy and Environmental Economics Inc. and the University of California, Irvine’s Advanced Power and Energy Program.

Researchers examined the use of gas over the next 30 years, evaluating scenarios to achieve a 40% reduction in GHG emissions by 2030 and by 80% in 2050 from 1990 levels. Potential costs, energy infrastructure and air quality implications were assessed to decarbonize the gas system, with implications for retail gas consumers.

In outlining the “integral part” that gas plays in the state, the authors noted that nearly $14 billion is spent every year for consumption in buildings, industry and power generation. While promising, the use of more renewable natural gas may have little impact on cutting GHGs.

The RNG potential in 2050 depends on whether all of the biomass, estimated at 43 million dry tons could be used only for fuel production 30 years from now. The estimated potential is 635 trillion Btu.

“The relatively inexpensive RNG (from biomethane in landfills and wastes) is limited and cannot alone reduce the GHG intensity of pipeline gas enough to achieve 80% reduction,” the authors said. “Once the biomethane part of the RNG supply curve is exhausted, then the state must turn to more expensive hydrogen and yet more expensive synthetic natural gas,” or SNG.

Technology, with limits, also could help decarbonize the system through not only RNG, but hydrogen from electrolysis, SNG derived from hydrogen and renewable carbon dioxide. “These fuels allow the continued use of the natural gas distribution infrastructure, but each has limitations.”

A transition strategy was recommended “to ensure, even as gas demand falls, the system remains safe and reliable for remaining gas customers,” which are expected to number into the millions in 2050.

“Early retirement of gas equipment could speed the pace of the gas transition but would come with real economic costs,” said the authors. A “structured gas transition” also should be considered to ensure the viability of infrastructure.

“More research is needed to identify the legal and regulatory barriers to implementing a gas transition strategy, along with targeted electrification programs,” the authors said.

In related news, the Gas Technology Institute and Electric Power Research Institute are collaborating on the Low-Carbon Resources Initiative to develop natural gas alternatives, with support from a group of U.S. gas and electric utilities.