The new year is shaping up as the time California may show its cards to unleash the most aggressive climate change-driven energy agenda in the nation, which includes gas, but “natural gas” specifically is not included in the long-term plans. 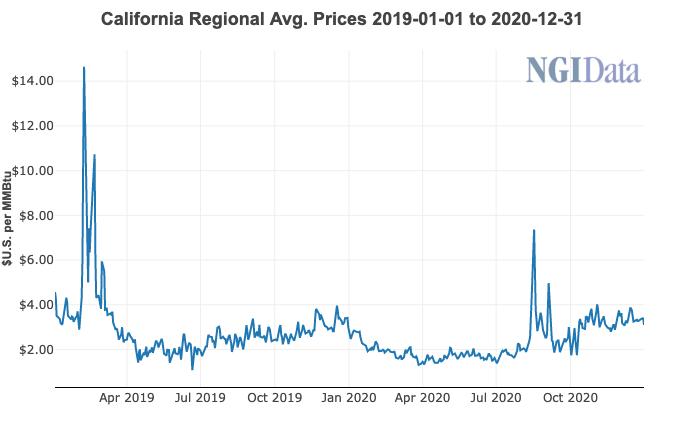 After establishing a 2020-2023 investment plan at $100 million/year, a draft decarbonization assessment for new buildings is slated early this year by the state agencies to move toward a 100% zero-carbon electricity policy.

“As Californria continues to decarbonize its economy through electrification of [energy] end uses, increased use of renewable natural gas (RNG), hydrogen, and other fuels, it’s essential to comprehensively discuss the strategy to transition away from fossil gas,” said CEC Executive Director Drew Bohan.

At a CEC meeting in November, staff offered a status report on the long-term phase-out of natural gas. Commissioner Andrew McCallister suggested that the CEC drop its reference to “natural” when talking about the various gas options in decarbonization programs.

“There are different flavors of gas, and we need to be more precise as a best practice,” McCallister said. “There is fossil gas, renewable gas, vented gas, hydrogen gas, etc., and whether they are ‘natural’ is increasingly immaterial. I think we need to think about the terminology we use so we can be more precise and understand the complexity emerging in this area.”

The CEC is focused on the state’s Integrated Energy Policy Report (IEPR) update hammered out in 2020, and a fresh 2021 IEPR that is due later this year. An assessment of the longer term use of the gas infrastructure system is to be part of the 2021 IEPR.

“California’s ambitious clean energy and climate goals are dramatically remaking our energy system, and our natural gas system is no exception,” said CEC’sCourtney Smith, deputy executive director. “In short, meeting the state’s ambitious mid-century carbon neutrality goals cannot be done if we continue to use fossil natural gas into the future as we are today.”

Smith stressed that the move away from natural gas use should be done in a “thoughtful, strategic way that doesn’t compromise reliability and protects customers from higher costs, while assuring pipeline safety.” The CPUC launched an ongoing study of the future of natural gas earlier in 2020, on which the CEC is collaborating.

The CEC plans to conduct what Smith called “a comprehensive assessment in the 2021 IEPR process, examining natural gas supplies and infrastructure, including how and where we appropriately downsize the distribution system, natural gas design standards, and the potential impact on gas prices and rates” from the proposed transition.

State governments across the United States are taking “meaningful action against climate change and toward building a clean energy economy,” according to the Center for American Progress, s nonpartisan policy institute in Washington, DC.

“Local governments and tribal nations are leading as well, and this leadership is critical in real terms by reducing carbon pollution that is harming American communities… leadership is also important for showing the world that most Americans remain committed to climate solutions, and it is demonstrating that bold climate action is possible and popular.”

The Rocky Mountain Institute noted that “most states have ambitious climate goals.” However, more regulatory action at the state level is needed “to protect ratepayers and ensure a safe, reliable, and fair transition away from reliance on natural gas and other fossil fuels.”

In the Natural Resource Defense Council’s year-end review of 2020, senior attorney Ralph Cavanagh underscored that progress is moving states away from increased reliance on natural gas. Cavanagh characterized the progress as in the form of energy efficiency and utility reform.

Once a supporter of natural gas, Cavanagh and his NRDC colleagues are recommending against new major investments in gas infrastructure and supporting various forms of electrification.