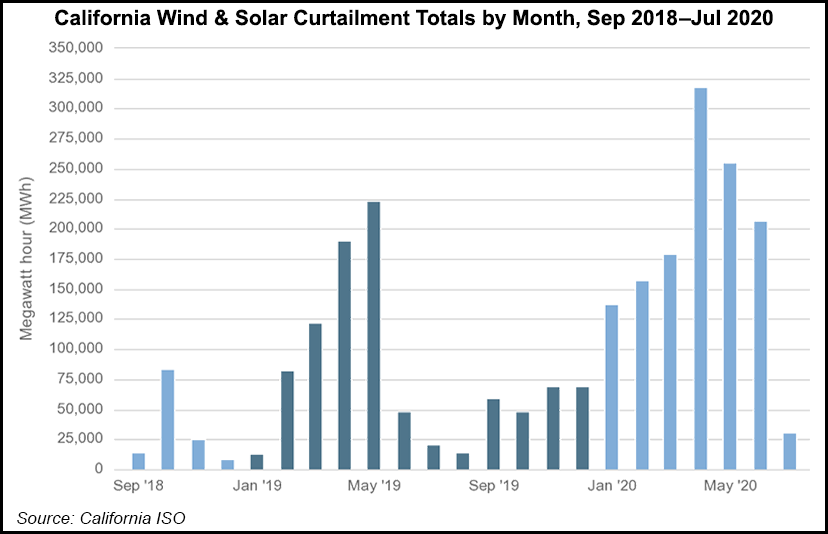 The mandated power shutoffs have been avoided this week partially with help from natural gas suppliers and distributors. Gov. Gavin Newsom has called on state energy agencies to determine the root causes and future solutions.

“Grid conditions for Aug. 14-15, with peak demands of 47,000 MW and 45,000 MW, respectively, were high but not above similar hot days in prior years,” said California Public Utilities Commission (CPUC) President Marybel Batjer. The California Independent System Operator (CAISO), along with CPUC and the California Energy Commission, have begun a joint investigation, according to Batjer.

However, with extra supplies, including from the state’s exploration and production (E&P) companies, as well as voluntary cutbacks by industrials and consumers, rolling blackouts were avoided, according to CAISO CEO Steve Berberich.

During a briefing on Wednesday, Berberich thanked industrial operators including Chevron Corp., Tesla Inc. and California Resources Corp. (CRC) for curtailing operations to conserve power and by selling excess supplies to the grid. “Monday and Tuesday, conservation was the reason, and probably the only reason, we were able to get through those days,” he said.

Berberich also thanked the Los Angeles Department of Water and Power (LADWP) for firing up several idled gas-fired power plants after 2 p.m. each day when renewable sources tend to diminish.

LADWP spokesperson Joseph Ramallo said the utility, which is not part of the state grid, provided 5,834 MWh from last Friday through Tuesday. It was expected to provide about 3,178 MWh on Wednesday. In addition, it assisted the Phoenix-based Salt River Project with excess power supplies.

More power was provided by Southern California Gas Co., which on Tuesday brought back to service transmission Line 235-2, sidelined for three years, with 170 MMcf/d of capacity. Spokesperson Chris Gilbride said the line initially was set to restart on Sept. 1.

The E&Ps stepped up to provide excess power, including the state’s largest producer, (CRC), which is a net electricity supplier to the grid. On Tuesday alone, it supplied more than 400 MW.

For example, CRC restarted a cogeneration plant at its Elk Hills oilfield to provide 23 MW to the grid. CRC operates a 550 MW gas-fired combined cycle generation plant in the field, which supplies up to 350 MW of surplus power and is connected to Kern River Pipeline and the Southern California Gas Co. network.

In addition, CRC reduced the electricity demand for its operations in the state by about 100 MW during peak hours by temporarily shutting in certain wells and operations.*

“We also temporarily curtailed steam production at one of our fields,” Venn said.

“The rolling blackouts so far have not directly impacted our members,” said WSPA spokesperson Kevin Slagle. “However, many of them adjusted their operations at the beginning of the week as a means of freeing up 220 MW for use on the grid.”

CIPA spokesperson Sabrina Lockhart said the independents working in California had no specific adverse impact from the heat and blackouts. She cited media reports that blamed “an overemphasis on intermittent energy sources and a reduction in natural gas-fired power plants.”

*Correction: California Resources Corp.’s load shedding contributions were misstated. The company said it reduced the electricity demand for its operations in the state by about 100 MW during peak hours by temporarily shutting in certain wells and operations. NGI regrets the error.